Why are Mizrahim failing to support Africans in Israel?

As African 'refugees' are served with their deportation papers from Israel, there is something disturbing about this cry from Yair Asulin in Haaretz for Mizrahim to rise up in solidarity just because both populations are non-white. Why would the predominantly Mizrahi residents of south Tel Aviv, whose experience of living cheek-by-jowl with the Africans has been less than happy, excoriate the Netanyahu government for taking steps to solve the refugee problem? (With thanks: Sylvia) 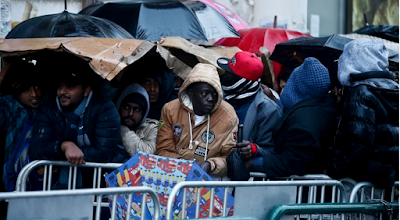 African migrants queue at the Israeli ministry of the interior (Photo: Meged Gozani)

The most resounding silence surrounding the refugees’ issue is that of the “Mizrahi movement.” I’m referring to the silence over the absurdity of the refugees’ expulsion and Israeli society’s disregard for the weak. I’m talking about the silence of those who deal with the Mizrahi issue, those who repeatedly seek to point out the racism in Israeli society and smash existing conventions, and who want to challenge prejudiced views about people and human nature.

On the face of it, what’s so surprising? A quick glimpse at almost any newspaper shows that the struggle seems to be between the Mizrahim – “south Tel Aviv,” “Shas” – and the asylum seekers. On the face of it, that’s the story: Are you for south Tel Aviv, are you for the women who kissed Netanyahu’s hand during that visit, the women who look just like your grandmother – or are you for the refugees, the foreigners, the blacks?

This tension also corresponds, of course, to the left-right fault line. It’s troubling to see how Mizrahi rhetoric, by its silence, falls into line with this story, with these old divisions. How it doesn’t rise up against this characterization of Mizrahi as “south Tel Aviv.” How it adopts, almost automatically, the identity that those in power designate for Mizrahim. How come there’s no uprising?

I deliberately talk about “uprising,” because the situation actually provides a real opening to escape from these labels. This situation is an opportunity to break down the order, a chance to say, “We stand in solidarity,” “We are no longer playing this game,” “Israel has deeply, criminally neglected south Tel Aviv since long before the asylum seekers, don’t con us, don’t sell us that nonsense, don’t cover one evil with another.” It’s a chance to say, “This is us.”

And yet, there is silence. We see Mizrahim identify with the old, cynical, degenerate order, with those who in the name of racism want to deport asylum seekers to a bad place. Obviously there is no equating the Mizrahi struggle with that of the refugees. That’s not the argument. Solidarity is something much deeper.

I live in Jerusalem, and I can say from experience that I will never go near the South Tel-Aviv area. Last time I took a bus with a friend and I was terrified. The whole area is a cess-pit. You don't want to see what is going on. I thank Hashem that the Mizrahim are Not for the "illegal immigrants". That is what they are. Rough, dirty, nasty young men stealing and looking for a free ride. They hate Jews as most are actually Muslim. As for the residents...I can not even imagine their terror! Now groups of them are trying to make their way to Jerusalem. Twice I've been pushed, shoved and taunted on my way to work in the early morning. Our government should round the lot of them up and parachute them back to where they came from. Sorry to sound nasty, but there is no sympathy at all from me.

Mizrahi Jews, know how important it is to protect the Jewish majority in Israel. Because if the Arabs and Muslims would become the majority in Israel, the Jews would again become dhimmis.
And suppressed by Islamic intolerance.

Your title should have been:
why do the hard left always blame "the mizrahim" for their own shortcomings, real or perceived

Frankly, I thought it should be obvious that they didn't survey more than 3 million "mizrahim" to reach the conclusion that they're all silent. Did they check out "the Ashkenazim"?

The mizrahi is in today Israel the new Butler and he is blamed practically for every mishap.

That doesn't happen only on the left, the Ashkenazi right is just as guilty. Netanyahu himself is not above this phenomenon. Like that time Netanyahu had a stupid emotional reaction to some event that he later regretted, and his excuse was :"the mizrahi [in me] jumped out" (kafatz li hamizrahi). He is of Russian descent of course, but he had said once that a DNA test of his spat revealed there was some Sephardi in him.

The problem is that they can insult and blame as much as they want, the term "mizrahi" is too vague to win a lawsuit and no one is totally certain to whom it really applies.
Doomed.

There are two overlapping issues with the migrant problems Israel is facing. First is the legal issue. These migrants are illegal. This means that they entered Israel illegally and are thus breaking the law of migration. This means that Israel has all the legal clout to deport them. Second is the issue of their status as refugees. Deport them or not. Many, if not most are economic and not political refugees. This means that are fleeing unemployment, poverty, and economic marginalization. However, this can also be the consequence of their lack of education and occupational skills. I bet they literally have no education and no skills to fall back into. And this is, in certain cases, no fault of their own, but still, that does not give people carte blanche to travel the world to better opportunity when one has nothing to give back. Like the saying says: In life there is no free lunch. In the long run, "free lunch" spells disaster to a receiving country. Countries like Israel have enough trouble with free lunches of their own unproductive citizens.

Political refugee status can no longer be associated with dissident persecution and intimidation we once understood it during the cold war, where people were held under the threat of the gun to oppress a group or an individual. And these were never allowed to leave the country unless they flee or manage to escape the constant surveillance. Most dissidents (in the old time) had careers, were professional or trade unionists. I am afraid to say that these recent migrants are what African nations do not want and would be happy to dispose of at will at the expense of those countries who they end up with. And this is the sad story of these aimless souls.

As to the Haaretz's dubious article putting the blame on Mizrahi's lack of compassion, I would say to these hypocrites to take some migrants home or adopt them as servants and workers and see what would happen or if not create centers of re-education for them to make them useful members of society at your own social equality expense agenda. To assume that common "supposed" discrimination between Mizrahi population and African migrants are somehow of the same kind, and should create an empathy among the Mizrahi, is ludicrous and gullible. Mizrahi population played a big role in building the state, in fact it is "sa raison d'etre" for without them, the state would not have been populated, defended and built by the sweat of the labor. And they had struggle to obtain respect for their diligence and patience regardless of whether they were discriminated or not.

What? Aren't you ashamed of yourselves that the millions of you are not out there to fight the deportation of illegal migrants?

Remember how you were expelled from Spain and how the Ottoman sultan sent his navy all the way to Spain to take you to safety? (!)

But Sammish, who do you think employs them? The residents of South Tel Aviv whose lives they have ruined certainly don't.

Sylvia, as to BB's remark about being part Mizrahi: I read parts of his father, Prof Netanyahu's book called something like Five Founders of Zionism. He has chapters on Herzl, Nordau, Jabotinsky and two others. He writes about Herzl and Nordau as being both part Sefardi and part Ashkenazi. Recall that Herzl's family came from Serbia where most Jews were Sefardim.
So if BB said he was part Mizrahi, maybe his father told him, maybe his father did genealogical research on Herzl, Nordau and his own family, inter alia.

I don't know where Tom Pessah 0f 972 got his story of Sultan Bayazid of the Ottoman Empire sending his own ships to bring Jews to Turkey. I have read a good deal about the expulsion and never read that. Anyhow, Pessah quotes a supposed saying by Bayazid about the Jews who were let into Bayazid's empire. Bayazid supposedly said: Bayezid reportedly criticized the Spanish rulers for rejecting the Jews: “You venture to call Ferdinand a wise ruler, he who has impoverished his own country and enriched mine!”

The problem is that the quote does not support keeping those migrants in Israel. After all, the expelled Spanish Jews brought with them skills and a high level of civilization. Moreover, the Ottoman empire in its Anatolian and Balkan parts was heavily Christian in population. It was advantageous to the Muslim empire to bring in skilled Jews to offset their dependence on the Christians [Greeks etc], many of whom were also skilled and whom the Ottoman would otherwise have had to depend on.
Now, these migrants in south Tel Aviv seldom bring needed skills with them. Besides many are Muslims and thus cannot be implicitly trusted as Israel might trust Christian Africans. So the situations are hardly the same or similar.