US Jews launch appeal to stop return of archive

The Iraqi-Jewish community in the US has launched an urgent appeal for financial support in the wake of the US government's decision to return the Iraqi-Jewish archive to Iraq in September 2018. 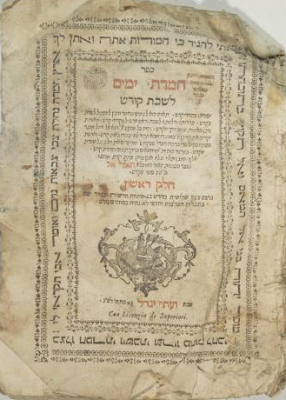 Page from an eighteenth-century collection of sermons, customs and rituals for Jewish fast days,  probably printed in Venice. It was one of 2,700 Jewish items found in the police headquarters in Baghdad.

The collection of books, documents and manuscripts was saved from the waterlogged basement of the secret police headquarters in Baghdad in 2003 and shipped to the US for restoration. A memorandum was signed by the Coalition Provisional Administration in Iraq promising to return the archive. But the US government failed to consider that the archive itself constitutes the property of the Jewish community and was stolen by the Iraqi regime.

This community now resides outside Iraq. If the archive returns to Iraq, it will become inaccessible to them. There are also fears that the archive will not be preserved, and might even be deliberately destroyed, if it returns to Iraq.

Jews in the US have been pursuing a two-pronged strategy. The World Organization of Jews from Iraq (WOJI), has pursued the diplomatic route. To-date WOJI has negotiated the cooperation of the Iraqi government and the State Department in extensions and delays to the return of the archives. The archive has been travelling around the US over the last three years. It is presently on display in Atlanta, Georgia and an exhibition in Dallas, Texas will end on 3 September.

JIMENA (Jews Indigenous to the Middle East and North Africa) has an activist approach. Inspired by the experience of Holocaust survivors to recover stolen Nazi art, JIMENA has been raising public awareness of the issue and is working with a group of lawyers and strategists to pursue legal avenues.

A committee representing the American Aid Society, Congregation Bene Naharayim in Great Neck and the Babylonian Jewish Center will disburse the funds to WOJI and JIMENA as the need arises.

"We have reached a critical time limit. We need to act before it is too late, otherwise these precious books, manuscripts and milestone family records of our ancestors will be lost forever," says Alice Aboody of the Babylonian Jewish Center.

An 'Archive' account has been established at the BJC (Babylonian Jewish Center), 440 Great Neck Road, Great Neck, NY 11021, where all donated tax-deductible checks with the memo "Archives" will be deposited. Tel (516) 773-9876.

Harif's petition 'Don't let the Jewish archive go back to Iraq'  has attracted over 10,000 signatures. Click here to add your signature.

I think that the best route for overturning this unjust decision is through the US courts. Of course, public education on the issue of Jewish Archive of Iraq and public pressure on Congress are important too.

Has anybody tried to get Morton Klein of the ZOA on board with this issue?