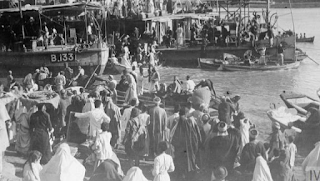 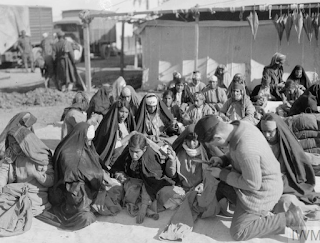 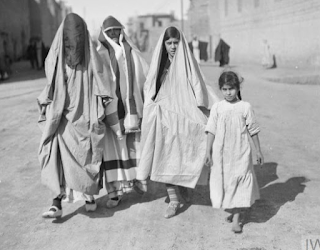 In the same year as the battle of the Somme, one of the great catastrophes for the British army took place on eastern front: the battle of Kut al-Amara. The Ottoman army laid siege to British forces from December 7, 1915 to April 29, 1916. Thousands of soldiers died in combat and from disease.  After the British surrender, more soldiers died in captivity as they were marched to Aleppo in Syria.  The British recaptured Kut in February 1917.

These photos, published at a Picture-a-Day, are from the Imperial War Museum's collection.The top one shows Jews and Christians disembarking from steamers as they return to their homes in Kut in 1917. The middle photo shows Jews and Muslims being taught to sew at a military base. The bottom photo was taken in Baghdad: It shows a group of Jewish women. The  fully-veiled one on the left is betrothed.

How come the women in these pictures can be identified as Jews? Because they wear coloured or white veils, in contrast to the black abayas worn by Muslim women.

These photos of veiled women were taken during a period known as the 'war of the veils': Jewish women were succumbing to modernisation and European influences.  Many were tempted to copy their teachers, who wore western dress. But according to Shmuel Moreh's Studies of the History and Culture of Iraqi Jewry,  fathers and even heads of the community resisted the abandonment of the veil, which was meant to cover a woman from head to toe, arguing that the very fabric of the community was being undermined. After WW1, women stopped wearing the veil and in 1932 the production workshops for veils closed down. In the 1950s, however, a time of great tension between Jews and Arabs, Jewish girls resumed wearing the black abaya so as not to stand out. Female members of the Zionist underground found the veil a useful camouflage for smuggling illegal weapons.

HeraCloset is one of the best online stores for beautiful stylish Abaya & Arabic clothing and silk Kaftans dresses for women on amazing prices.

I think this is an informative post and it is very useful and knowledgeable. therefore, I would like to thank you for the efforts you have made in writing this article.
عبايات جديد

Hello
I Read your article. Thanks for sharing such beautiful information, and I hope you will share some more info about Abaya Designs. You wrote really very well, I really like your blog and information provided by you. I appreciate your work.
Thanks