The Purim 'days of Miracle' in Basra 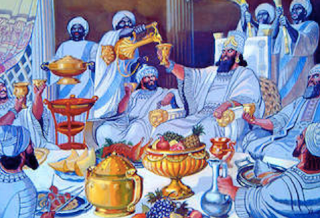 A feast at the court of King Ahasuerus

The boisterous and joyful festival of Purim is upon us, beginning tomorrow evening. It celebrates the liberation of the Jews of Persia from the evil Haman. His plan to destroy the  Jews was foiled by Mordechai and his niece Esther. She had been chosen by  King Ahasuerus as his queen.

The story of Purim is told in Megillat Esther, but different Jewish communities have celebrated their own miraculous deliverance at different times. The Jews of Basra celebrated the Persian Purim of 1775.

The British Library Hebrew and Judeo-Arabic collection contains an imprint which prefaces the Megilla with an account of the 'miracle' of Purim in Basra in 1775.

Events surrounding the capture of Basra by the Persians indicate the clear preference of the Jews for Turkish rule over that of the Persian rulers. The rising importance of Basra's Jewish merchants had led to Persian fears that their own coastal ports on the Persian Gulf would decline.

Despite the aid of the Saraf (banker), Jacob Aaron Gabbai, the Turkish governor of Basra could not stand up to the Persians. The Persians demanded a ranson from the Jews and when they could not meet this heavy tax, ordered troops to search Jewish homes for the money which they thought the Jews had hidden. This they did with great brutality. Jewish women died rather than submit to rape. The heads of the community were exiled to Persia.

Four years later, the Persians left Basra unexpectedly. Following the death of the Shah of Persia. Jacob Aaron Gabbai returned from exile, was granted state privileges by the Turks and was appointed Nasi of Baghdad Jewry.

It was to celebrate 2 Nissan 5535, the  'days of miracle' of the disappearance of the Persians that the Persian Megillah was authored by Jacob Shaul ben Eliezer Jeroham (Eliashar) and printed by Ezra Reuven Dangoor in 1905/6.


Point of No Return articles on Purim