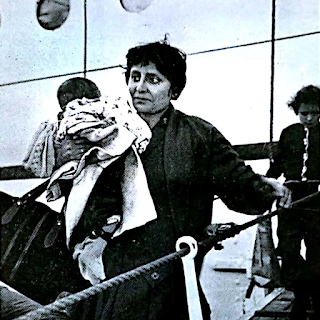 The inflow of refugees presented a challenge to the Central British Fund, the main body for resettling Jewish refugees in Britain (now known as World Jewish Relief). A JTA article points out the differences between the two sets of refugees: for example, the Hungarian women immediately put their skills to good use, while upper class Jewish women arriving from Egypt ' had never worked in their lives'.

The 26th Annual Report of the CBF, uncovered by researcher Liran Morav, reveals that  some 622 families representing 1,937 individuals had registered with the Jewish Refugees Committee. Of those, 338 families had British nationality, although most had never set foot in the country, still less spoken the language. As British subjects, however, they were eligible for help from the Anglo-British Resettlement Board, established in 1957 to deal with British expellees. The first arrival to join the Spanish and Portuguese Jews' Congregation was Joseph Savdie, chairman of the Cairo Stock Exchange.

The refugees, says the report, 'needed every kind of assistance' - including housing and furnishing grants. They received ex-gratia loans against personal  and business assets left behind in Egypt, on a sliding scale. These loans amounted to about half the losses suffered. The maximum a refugee could receive was £10, 000 for lost assets of £20,000 or more.

Some 284 families (930 people) were ineligible for help, being stateless or of other nationalities. The Jewish Refugees Committee stepped in to help supply funds for rehousing, in addition to supplementing inadequate family incomes. It also subsidised students.

Another 44 cases, or 118 individuals immigrated into Britain that year. All were sponsored by a guarantee from relatives that they would not be a charge on public funds.

One of the more startling findings of the CBF report is the aid given to Moroccan Jews, then the largest Jewish community in the Arab world. Some 30 percent received help from the American Joint, with which the CBF collaborated closely. "The living standards of most of the Jewish population of Morocco are very low and basic needs correspondingly great", states the report.

The Joint had to step in to fund the schooling of 40,000 children when the Moroccan government (Morocco became independent in 1956) froze its subsidy at the 1957 level, leaving the Alliance (AIU), which educated 30,000 Jewish children, with a large deficit.


Hello Everybody,
My name is Ahmad Asnul Brunei, I contacted Mr Osman Loan Firm for a business loan amount of $250,000, Then i was told about the step of approving my requested loan amount, after taking the risk again because i was so much desperate of setting up a business to my greatest surprise, the loan amount was credited to my bank account within 24 banking hours without any stress of getting my loan. I was surprise because i was first fall a victim of scam! If you are interested of securing any loan amount & you are located in any country, I'll advise you can contact Mr Osman Loan Firm via email osmanloanserves@gmail.com


Hello Everybody,
My name is Ahmad Asnul Brunei, I contacted Mr Osman Loan Firm for a business loan amount of $250,000, Then i was told about the step of approving my requested loan amount, after taking the risk again because i was so much desperate of setting up a business to my greatest surprise, the loan amount was credited to my bank account within 24 banking hours without any stress of getting my loan. I was surprise because i was first fall a victim of scam! If you are interested of securing any loan amount & you are located in any country, I'll advise you can contact Mr Osman Loan Firm via email osmanloanserves@gmail.com

We are authorized financial consultants providing reliable loans to individuals and funding for business, home, personal and projects start up. Are you tired of seeking loans or are you in any financial mess. Do you have a low credit score, and you will find it difficult to get loans from banks and other financial institutions? then worry no more for we are the solution to your financial misfortune. we offer all types of loan ranging from $5,000.00 to $650,000,000.00USD with a low interest rate of 2% and loan duration of 1 to 35 years to pay back the loan secure and unsecured. Are you losing sleep at nights worrying how to get a Legit Loan Lender? If Yes worry no more for we are out here to help the less financial privileges get the loan they need to get back on their feet no matter your credit score, you can say goodbye to all your financial crisis and difficulties. Contact us on the following Call/Text +1(415)630-7138 Email drbenjaminfinance@gmail.com

Do you have a bad credit? Do you need money to pay bills? Do you need loan to buy, refinance or renovate your home? Is it necessary to start a new business? Do you have an unfinished project due to poor funding? Do you need money to invest in any specialty that will benefit you? BENJAMIN LOAN INVESTMENTS FINANCE aims is to provide excellent professional financial services which include the followings
*1 Personal loan
*2 Business loan
*3 Home loan
*4 Farm Loan
*5 Education loan
*6 Debt consolidation loan
*7 Truck Loan
*8 Car Loan
*9 Eviction Loan
*10 Equipment Loan
*11 Hotels Loan
*12 Refinancing Loan and many more

Yours Sincerely,
Dr Benjamin Scarlett Owen
+1(415)630-7138
drbenjaminfinance@gmail.com
We are certified and your privacy is 100% safe with us. Worry no more about your financial problems.

Do you need Finance?
Are you looking for Finance?
Are you looking for a money to enlarge your business?
We help individuals and companies to obtain loan for business
expanding and to setup a new business ranging any amount. Get a loan at affordable interest rate of 3%, Do you need this cash/loan for business and to clear your bills? Then send us an email now for more information contact us now via Email financialserviceoffer876@gmail.com Whats App +918929509036

DO YOU NEED A LOAN : TRUST ME WE CAN SOLVE YOUR FINANCE PROBLEM
Do you need Personal Loan?
Business Cash Loan?
Unsecured Loan
Fast and Simple Loan?
Quick Application Process?
Approvals within 24-72 Hours?
No Hidden Fees Loan?
Funding in less than 1 Week?
Get unsecured working capital?
Contact Us At : ahmedconsultancycompany@gmail.com
Phone number :+1 516-591-0949 (Whatsapp Only)

DO YOU NEED A LOAN?
DO NOT KEEP YOUR FINANCIAL BURDEN TO YOURSELF CONTACT US NOW FOR ANY KIND OF LOAN AT A LOW INTEREST OF 2%. stevewilsonloanfirm@gmail.com whatsapp: +16673078785, company website: https://stevewilsonfinancialloanfirm.weebly.com

Our loans are well insured for maximum security is our priority, Our leading goal is to help you get the service you deserve, Our Loan program is the quickest.

We give out loan in any currency of your choice Yuan, Dollar, Thai baht, Euro, Dinar, etc} and duration of 1 to 30 years to pay back the loan (secure and unsecured).
Do you need any kind of loan and have low credit score, Have you find it difficult to get loans from local banks and other financial institutions? solution to your financial problem is STEVE WILSON LOAN FIRM.