A Jewish candidate, Simon Salama, has been nominated by the Ennahda party, a member of the government coalition, to stand in the May municipal elections, The Tunisian Gazette reports. As the Elder of Ziyon blog points out, it is not clear if the Ennahda party has moved away from its Islamist roots, or whether this move is a cynical political manoeuvre. Approximate translation by Google Translate. 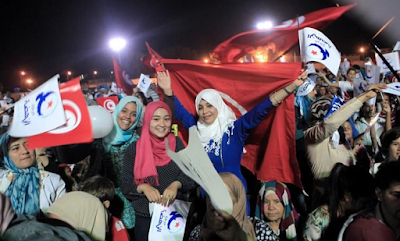 Supporters of the Ennahda party

The Tunisian Ennahda (Renaissance) party, which has an Islamic prerogative, is working to nominate a Jewish figure in one of its lists to run for municipal elections scheduled for May 6.


The movement believes that this step "reflects the openness of the Ennahda and its civilization," while others assert that it is a "political maneuver" to win the support of more voters in the next municipal benefit.
"The Tunisian Jew, Simon Salameh, will be on one of the lists of the Ennahda party, after the completion of the legal procedures for its submission," party spokesman Emad Khmiri told Magharebia.
This comes at a time when the movement, participating in the coalition government, began to present its party lists "open" to the independent figures.
On Thursday, the Independent High Electoral Commission (IHEC) opened the door for nominations to be closed on February 22.
Commenting on the move, a member of the political bureau of the Ennahda party said that their candidacy for a Tunisian Jew on top of one of its lists is "further proof of the openness of his movement and its embodiment of the meaning of citizenship, which is not based on the principles of efficiency and serving the demands of the people."
"Religious minorities are Tunisians on an equal footing with the Muslim majority, and the laws guarantee them the same rights."