With the festival of Purim beginning tonight, it seems appropriate to feature the story of Sipora, an Iranian-Jewish refugee in Holland. Sipora was sentenced to death in her native Iran for helping abused wives, but has not been offered asylum by the Dutch authorities, who are tightening up their immigration policies. She could go to Israel, but fears putting her husband, still in Iran, at risk. (In the past, Israel has insisted on being the sole destination for Jewish asylum seekers: it is not clear if this is also a factor in Sipora's case). JTA reports: 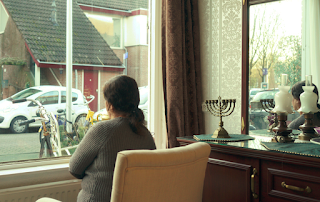 Sipora at her daughter's house in Holland (photo: Cnaan Lipshiz)

Sipora, 60, was sentenced in absentia to death by public execution in 2013 by a Tehran court that convicted her of “violating Islamic rules [of the] Islamic Revolution” and “anti-regime activity.” Her crime: running an underground organization that found housing solutions for women with abusive husbands who could not obtain a divorce.

Luckily for Sipora, she had already left Iran a year prior to her sentencing to help with the pregnancy of her daughter — herself a political refugee who has been living in the Netherlands since fleeing her native land in 2010. Sipora’s daughter, Rebecca, fled in connection with her involvement in the making of a documentary film about the fight for democracy in Iran.

“A few weeks after I came to Holland, I called my husband on the telephone. He asked me to go on Skype. I knew something was wrong,” Sipora recalled. Sipora’s husband of over 40 years, a Jewish building contractor with a heart condition, told her online that Iran’s dreaded secret police were looking for her and other members of her group. “In that moment I knew there is no going back,” Sipora recalled.

Unfortunately for her, Sipora’s legal troubles back home coincided with a toughening of immigration policies in the Netherlands, where the center-right ruling party is bleeding votes in favor of the anti-Islam Party for Freedom, which favors a shutdown of immigration from Muslim countries.

Rebecca received a temporary residency permit and later citizenship without delay even though she had no death sentence against her in Iran. Meanwhile, the Dutch Immigration and Naturalization Service has consistently declined requests by Sipora two years later. Instead, she is in legal limbo — neither granted asylum nor deported, despite her whereabouts being known to authorities.


Wishing all Point of No Return readers a Happy Purim!
Posted by bataween at Wednesday, February 28, 2018