A visit from a Bahraini prince to Israel follows that of an interfaith delegation and testifies to the burgeoning unofficial relations between the two countries. Middle East Monitor reports: 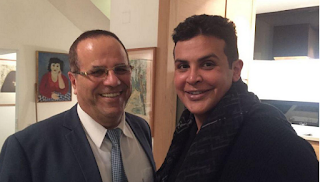 
“I met publicly for the first time in Tel Aviv with Mubarak Al Khalifa, a Bahraini prince in order to strengthen relations between the two countries,” Kara of Israel’s ruling Likud party said on Twitter.

“Tomorrow [Monday] I will have the honour to host him in the Israeli Knesset,” he added.

Bahrain says it has no relations with Israel however it has been reported that officials from both countries maintain contact and visits privately.

Read article in full
Posted by bataween at Wednesday, February 07, 2018