Eness Elias’ recent article about Holocaust commemoration in Israel (“Why North African Jews Are Missing From the Holocaust Narrative”) unfortunately contained some inaccuracies and claims that have no basis in reality.
In her piece, Elias mentions the terrible tragedy that occurred in the Giado (or Jadu) camp in Libya. In 1942, the Italian fascists imprisoned more than 2,600 Jews from Cyrenaica, and a few months later, more than 500 other Jews were sent here. The scenes at Giado were reminiscent of those in the Lodz and Warsaw ghettos: piles of dead bodies, with no one to bury them. However, contrary to what the article claimed, it is not the case that “there were many camps like Giado across North Africa.”
What happened in the Giado camp did not happen anywhere else in North Africa – not even in Tunisia, where there were 30 forced labor camps, most of them under the command of the SS.
Elias is angry at the prejudices against North African Jews and the silence concerning the fate of North African Jews in the Holocaust – particularly, seemingly, by Yad Vashem, whose mission “was to commemorate all the Jewish communities and the Jews murdered in the Holocaust. But until 2005, when a small memorial corner was created, the disaster of the North African communities was completely unrepresented.”
This is incorrect. Twenty-five years ago, Yad Vashem added the communities of Libya and Tunisia to the Valley of the Communities, which commemorates 5,000 Jewish communities that were damaged or destroyed in the Holocaust. Among the torch-lighters in the Holocaust Remembrance Day ceremony 36 years ago (1982), 34 years ago (1984), 19 years ago (1999) and just two years ago (2016) were survivors from Libya and Tripoli. Also, in the field of education, 18 years ago a chapter on North African Jewry was included in the high school textbook “Holocaust and Memory,” edited by Prof. Yisrael Gutman, while more than a decade ago Yad Vashem’s International School for Holocaust Studies produced a special unit on the subject. 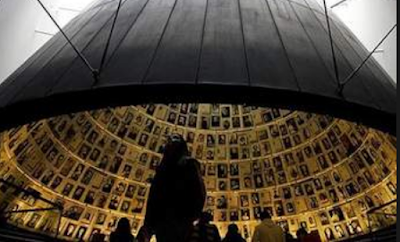 A display of Shoah victim photos at Yad Vashem Museum
Moreover, it is not accurate to say that research on North African Jewry and the Holocaust is not done at Yad Vashem but rather at the Ben-Zvi Institute in Jerusalem. The first Israeli scholarly study on the subject was edited by Prof. Michel Abitbol at the Hebrew University and published in 1986 (and in English three years later). Entitled “The Jews of North Africa During the Second World War,” it was published jointly by the Hebrew University and the Ben-Zvi Institute, together with Yad Vashem. Also, a comprehensive study of these communities was also published by Yad Vashem 20 years ago as part of the Encyclopedia of Jewish Communities project.
I edited the Encyclopedia of Jewish Communities in Libya and Tunisia, and collecting the material for it took seven years. It included research in archives in Israel and abroad, recording the testimony of more than 100 survivors, historical maps that were constructed specifically for the study, photographs from private collections and archives, and a wealth of information about the history and culture of the communities in the big cities and small towns before, during and right after the Holocaust. The interviewees – men and women alike – were very pleased with the final product and proudly gave the 533-page book as a precious gift to their families.
The meetings to collect the survivors’ testimonies were an emotional experience for both interviewer and subject, and certainly did not “lead to frustration and anger among the survivors” and did not entail “prejudices, racism and stereotyping.”
The use of phrases such as “exclusion from the collective memory” and the accusation of deliberate racism on the part of the Ashkenazi establishment all points to a lack of knowledge or a disregard by the writer for all of the things described above and for other efforts, such as the annual memorials held by Yad Vashem for the communities of Libya and Tunisia, just as it does for other communities.
It is important to understand that this “competition” over the degree of suffering in the Holocaust – the idea at the heart of the article, which cites a new book by historian Yvonne Kozlovsky Golan, “Forgotten from the Frame: The Absence of the Holocaust Experience of Mizrahim from the Visual Arts and Media in Israel” – leads to a distortion of reality and a loss of proportion.
Read article in full
Why North African Jews are missing from the Shoah story
Posted by bataween at Monday, January 22, 2018

Wow! they were mentioned in a book and included in the Valley of communities at Yad Vashem.
And what about reparations for the survivors? More than fifty years after the war, when representatives of Tunisian deportees mentioned reparations and whether Israel was waiting for all of them to die to remember reparations, the then Chairman of the Yad Vashem Council, the late Tommy Lapid ran to the microphones to warn that "Mizrahim want to jump on the Shoah bandwagon". The ironic tone of his voice and the callousness of his words still ring loud and clear in my memory to this day.