Truth about vanished kids must be revealed, says Rivlin

President Rivlin of Israel met representatives of an NGO lobbying for full disclosure of what happened to Yemenite children who disappeared without explanation in the transit camps of the 1950s. The Jerusalem Post has the story: (With thanks: Stan ) 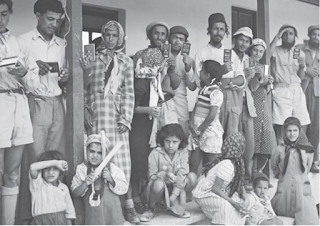 Yemenite Jews newly settled at a moshav in Israel

Decades after the disappearance of scores of Yemenite children in the earliest years of the state, the truth of how and why they disappeared has not been fully clarified.

On Monday President Reuven Rivlin met with Yael Nagar, Yael Tzaddok and Rachamim Eden, representatives of Achim Vekayamim (Brothers and Living), an NGO dedicated to full disclosure of what happened to the children – whose parents continued to grieve for them for years and never believed stories told to them in hospitals healthy children had suddenly died.

“The truth must be revealed,” declared Rivlin. “We are sufficiently strong today to cope with the truth. This is an episode that leaves a wound in the heart of the nation and we must not ignore it.”

He was confident that in the near future, a way would be found at the state level to intensify the investigation and to learn what still needs to be known.

A special Knesset committee set up to investigate available evidence reached the conclusion that in a number of cases, children were abducted and given to Jewish families in the United States for adoption. The committee even knows the identity of the chief liaison in this affair.

That fact, however, has not given closure to Israel’s Yemenite community.

Read article in full
Posted by bataween at Saturday, January 20, 2018