Remembering the Baghdad hangings, 49 years ago 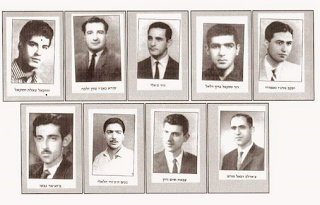 Tomorrow is Holocaust Memorial Day. Although the event is not remotely comparable to the mass extermination of six million Jews,   it is also 49 years since the Ba'ath party regime hanged nine innocent Jews in Baghdad's Liberation Square. Half a million Iraqis came to sing and dance under the corpses. Of the nine victims, four had their ages falsified because they were under the legal age for hanging of 18.

A few days ago, Richard Atrakchi appeared on the Israeli Arabic Channel to recall his memories of that fateful time. You can see his interview (Arabic) from 16:47 minutes into the video below. The clip has some rare footage of the scenes in Liberation Square on 27 January 1969.

More about the Baghdad hangings

The tenth man and his sister

I attended a lecture shortly after the hangings at an American University in the eastern US where Dr Ismail Faruqi was the lecturer. When I raised the issue of the hangings in Iraq, Faruqi said that "if we had wanted to destroy the Jews, we could have done it at the time of Muhammad." That is how some of the Arab academics in the USA thought at that time. And some probably still think that way today.