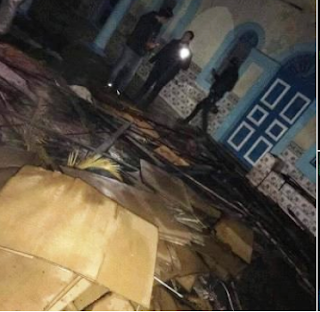 
Update: the Djerba Jewish community will not be driven out by the recent incidents, says Elie Trabelsi. His comments in DW must be taken in the context that the Trabelsi family have a vested interest in tourism to the island. (with thanks: Stan)

As protests spread across Tunisia for the third night running, two petrol bombs were hurled on Tuesday at the ancient synagogue of Al- Ghriba, according to JTA. The Jewish school on Djerba was also attacked, says a report in the Jerusalem Post. There were no casualties (with thanks: Lily):

The Jewish community of Djerba was targeted on Tuesday night, as violent anti-government protests raged elsewhere in the North African country, witnesses said.

Head of the local Jewish community, Perez Trabelsi, told Reuters that petrol bombs had been thrown at the Jewish school on the tourist resort island of Djerba, causing some damage but no injuries.

There were no protests in Djerba but locals said the assailants had exploited the fact that there was a reduced security presence as police were busy elsewhere combating anti-government protests around the country.

“Unknown people took the opportunity of the protests and threw Molotov cocktails into the lobby of a Jewish religious school in Djerba,” Trabelsi said.