Leaders appeal for Yemeni Jews to come to UK

Politicians and Jewish community leaders this week called on the government for “urgent” help to get one of the last Jewish families left in war-torn Yemen to London to reunite with Stamford Hill relatives, according to a Jewish News scoop. It is not clear if the Jews in question are living in the Sana'a compound, where the 50 or so Jews have been receiving food parcels. In 2011 MPs Diane Abbott and Mike Freer failed  to get Yemeni Jews from Raida in the north admitted to the UK as refugees. 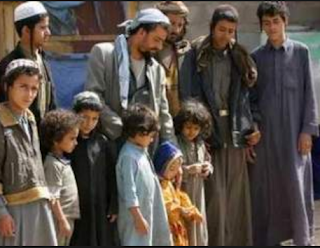 Supporters of the family say they are “subject to persecution” as efforts build to help facilitate the arrival of the six family members, including the mother, father, three girls and the father’s mother, who has just turned 70.

Their plea for help came as the United Nations said last weekend that the Yemen conflict “has created the worst humanitarian crisis in the world, a crisis which has engulfed the entire country”.

Supporters say the family are “living in appalling conditions and their lives are in danger” and that the Home Office has advised that the family needs to apply to come to the UK, but the visa application centre in Yemen is closed.

Jewish News has seen the names and dates of birth of the six family members, two of whom are under the age of 18, who are seeking refuge in the UK, as well as copies of legal opinions discussing how best to help.

A spokesman for the family said: “We understand that no special procedure will apply to them and that they need to make a valid application to come to the UK. However, we hope that, given their particular plight, this will be considered favourably.”

Read article in full
Posted by bataween at Friday, January 19, 2018