As Iranian protesters take to the streets, the Jewish community is keeping out of trouble, but the regime is thought to have arrested* Jews for reportedly vandalising synagogue artefacts.  The security that Jews in Iran generally have enjoyed up to now may quickly unravel. 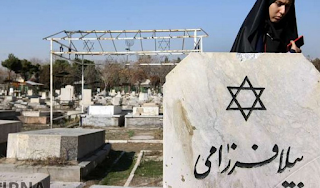 Monument to Jews who died in the Iran-Iraq war (Photo: Iran Media)

On Tuesday, reports began circulating that several Jews had been arrested, though it is not known who they are or on what charges. Because of the precarious position of the Jewish community in Iran, fears of retaliation are running high, making it difficult to confirm these reports. (*Indeed some contacts have categorically denied the rumours - ed.)

What is clear is that the Iranian Jewish community in the diaspora is unnerved. Many suspect these incidents are related, but they are not sure how or why—and fear they’re about to be followed by still other disturbances.

A statement released earlier this week by Susan Azizzadeh, the president of the Iranian American Jewish Federation (IAJF) in Los Angeles, and Robert Kahen, the president of the IAJF in New York, expressed a “deep concern” over the recent incidents. “In light of these clearly anti-Semitic incidents,” the statement read, “we call upon the authorities in the Islamic Republic of Iran to ensure the protection of all places of worship as well as all members of our community, and to bring the perpetrators of these criminal acts to justice.”

Meanwhile, writing in the Jerusalem Post,  Anneka Hernroth-Rothstein manages to contact an Iranian Jew to gauge the community's situation at a time of protest (with thanks: Michelle):

"My friend tells me that they are safe, that the regime knows that Jews do not participate in these protests, that they never seek out conflict or trouble and wouldn’t be part of revolutions or uprisings against the ayatollah.

"To an outside observer, this may sound like cowardice or agreement, even, but knowing what the Jews of Iran have lived through under this regime it is an answer that makes sense; theirs the only method possible. What I learned about the Jewish community of Iran was that theirs was a freedom with strings attached, a somewhat secure life inside a gilded cage, where minorities are kept as proof of a tolerant society, but forced to comply with the oppressive lines and framework of an unpredictable regime. In certain ways, being a Jew in Iran means a more secure life than that of a non-Jewish Iranian, but that security is hinged on an agreement that everyone involved knows can be torn to shreds at any time."