Iran's Jews have tradition of activism

Fascinating Tablet piece about the history of Jews in Iran by Miriam Levy-Haim. The  community had suffered from Shi'a persecution  and forced conversions, but the 20th century heralded a better era under the modernising Shah Reza I. However, Jews tended to be drawn to Zionism. Some were active in reformist leftwing parties such as the Tudeh.

In December 1925, a high-ranking military officer, Col. Reza Khan, who held a new cabinet position of army commander since 1921, crowned himself Shah-in-Shah of Iran. He was supported by two political parties, the Revival Party and the Reformers’ Party. Belying its name, the Reformers’ Party had a conservative and religious base, comprised of prominent clerics, wealthy merchants, and landed aristocrats. Because of the paternalism of traditional Iranian society, the party was strengthened by universal male suffrage, which extended the vote to the rural masses—the traditional elites were able to draw on the votes of their peasants and tribesmen. In contrast, the Revival party’s base of support was young, Western-educated reformers with a nationalistic agenda, which called for policies such as the separation of religion from politics and the replacement of minority languages throughout Iran by Persian. They idealized pre-Islamic Iran and denounced Arab Muslim imperialism, which they saw as the cause of Iran’s backwardness.

The Revivalists believed that fascism was the most effective way to achieve national cohesion. The opening editorial of Farangistan, an influential journal and organ of the reformers’ movement, read in part:


In a country where 99 percent of the population is under the electoral sway of the reactionary mullahs, our only hope is a Mussolini who can break the influence of the traditional authorities, and thus create a modern outlook, a modern people, and a modern nation.

While Reza Shah’s coronation as king and the development of the nationalist movement occurred before the advent of Nazism in Germany, the ideological affiliation of the right-wing nationalists with fascism in the 1920s and their support for Reza Shah foretold Reza Shah’s close relationship with Hitler, which worried the Iranian Jewish community.

During Reza Shah’s reign, the Jewish community did make political progress but was still the target of anti-Jewish sentiment. Ayub Loqman Nehuray, the Jewish representative in the Majles (1909–1925, 1927–1943), advocated for and achieved some basic legal rights for Jews during his tenure: He secured leave for Jewish military officers during the holidays; he changed inheritance laws that had made a jadid al-Islam (new convert to Islam) the sole heir of his or her non-Muslim family; and he collaborated with Zoroastrian and Armenian representatives to eliminate the law that required registration of marriage and divorce with a government office, which allowed religious minorities to follow their own communal practices. 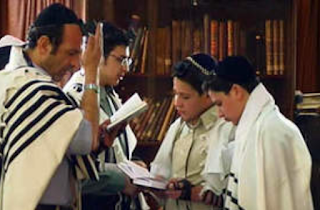 There was a heated campaign in the Jewish community for the representative of Jews to the fifth Majles between Dr. Loqman and Shemuel Hayim, a Jewish activist and journalist. In 1922, Hayim began publishing an eponymous Judeo-Persian newspaper called He-hayim (The Life), in which he advocated for political equality for Jews. He wrote to the League of Nations in Geneva regarding violations of Jewish rights and was active in several Jewish community organizations, such as the Zionist organization Ha-histadrut ha-tzionit and served as president of Tehran’s Jewish organization, Ben Israel Organization (Anjoman-e markazi-ye bani esra’il-e tehran). He was elected to the Majles in 1925. In 1926, in middle of his term in the Majles, Hayim was inexplicably arrested on charges of conspiring against the Shah. He was imprisoned for six years while maintaining his innocence before he was executed in 1931.

Reza Shah Pahlavi’s forced abdication by the Allies in 1941 spurred greater Jewish political involvement, for the most part, gravitating toward leftist movements. If Jewish Iranian intellectuals were repulsed by the ultra-nationalist parties because of the obvious Nazi and fascist ideological influences, they were drawn to the leftist camp primarily for class reasons. The Tudeh party was a class movement, forming immediately after Reza Shah’s abdication, rooted in the intelligentsia and the industrial working class, which included Jewish and other ethnic workers. Young Jewish men and women were active in the Tudeh party and participated in underground meetings and demonstrations. Some of them were arrested and imprisoned for their activities and tortured by the authorities. Jewish-Iranian intellectuals engaged in both nationalist and Zionist activities, supporting Prime Minister Mosaddeq and the effort to nationalize the Anglo-Iranian Oil Co. and organizing specifically Jewish and Zionist meetings and resisting anti-Semitism.

Yet while Jews did join the Tudeh party, the movement failed to gain mainstream Jewish support, in part because many Jews were drawn to Zionism. A third of the Iranian Jewish community moved to Israel between 1948 and 1953 for Zionist as well as economic reasons. Most of these emigrants came from the provinces and working class, precisely the natural base for Tudeh members and activists. This massive wave of emigration also helps explain why the Jewish community was so prosperous under the rule of Mohammad Reza Shah—the poorer strata of the community had left to Israel.

Read article in full
Posted by bataween at Sunday, January 21, 2018