Egyptian synagogues 'are not social clubs'

A US-based organisation of Jews from Egypt has urged the Egyptian government to intervene and prevent the tiny Jewish community of Egypt from holding cultural events in their remaining synagogues. 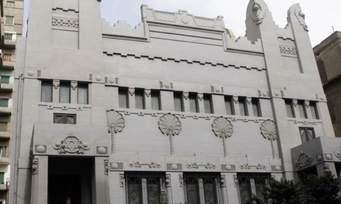 Will the Adly St synagogue in Cairo now become a social club?

Desire Sakkal of the Historical Society of Jews from Egypt wrote to the Egyptian ambassador to the US to protest the announcement by Mrs Magda Haroun, the president of the Jewish community of Cairo.

"Since there are fewer than 10 Jews in Egypt, the events will have to be non-Jewish in nature. We protest this action", he wrote. "Our synagogues are houses of worship and must be used only for religious functions. They are not social clubs."

Reminding the Egyptian government that it has repeatedly stated that it is determined to protect its Jewish heritage, Mr Sakkal claims that Mrs Haroun does not have the authority to make changes. "It stands to reason that (synagogues) should be preserved only for their original purpose."

No regular services take place in any of Cairo's remaining synagogues, although the Maadi synagogue is occasionally used by members of the Israeli embassy.
Posted by bataween at Thursday, January 04, 2018