Egyptian sociologist lectures in Israel to cries of 'traitor'

Leading Egyptian sociologist Saad Eddin Ibrahim was heckled by a group of pro-Palestinians as a traitor to their struggle at a lecture he gave in Israel. Yet his visit is a sign that Egyptian intellectuals may be warming to Israel: hitherto, the government has made all the running. (This is in contrast to Iraq, where the government shows no interest in making peace with Israel, but Iraqi intellectuals have been swept up in a wave of sympathy and nostalgia for their former Jewish community). Roger Hercz reports for the New Arab: 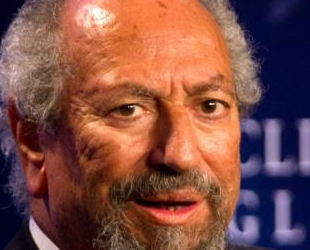 The 79-year old sociologist was received on Tuesday as a rock star in the packed auditorium at Tel Aviv University. Around 600 people turned up to hear him, but soon it transpired - not everyone was happy.

Ibrahim was in Israel to participate in a two-day academic conference about Egyptian society, with his topic of discussion titled: "Lesson from 100 years of changes in Egypt".

A long list of Israeli and other foreign academics participated in what was described as an international conference.

Ibrahim's participation was, however, a major blow to the anti-normalisation movement in the Arab world.

Not only was the Egyptian sociologist a known human rights activist and a strong proponent of a widening of civil society in his home country, Ibrahim, as opposed to most other activists, had also paid the ultimate price for his fight against oppression.

In the year 2000 ex-president Hosni Mubarak threw him in jail for, among other claims, "defaming Egypt's image abroad".

"Thank you for inviting me," he told his Israeli hosts. While strong in spirit, it was clearly a physically frail man who greeted the Israelis. He said his years in prison had ruined his health. He could hardly walk, even after five surgeries. And while laughing and smiling, his voice was weak.

Read article in full
Posted by bataween at Sunday, January 07, 2018