The Times of Israel has the back story to the December 2017 multifaith visit to Israel of a delegation from Bahrain. The initiative has the blessing of the Bahraini royal family, and is one of many undertaken in recent years to project an image of religious tolerance. A cathedral is being built on the island, which has a US naval base. About 30 Jews still live there. 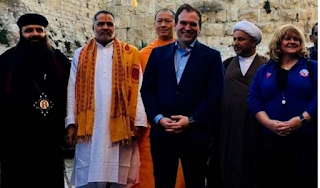 Members of the Bahrain delegation to Israel

In a strikingly rare instance of a visit to Israel by representatives from an Arab country without diplomatic relations, a delegation of religious figures from the Gulf kingdom of Bahrain traveled to the Jewish state last month “to send a message of peace” from King Hamad bin Isa Al Khalifa.

“Our message is peaceful coexistence with no government involvement,” said Betsy Mathieson, president of the Bahrain-based nongovernmental organization “This is Bahrain,” who led the delegation.

The 24 participants — Sunni and Shiite Muslims, as well as Buddhists, Christians, Hindus and Sikhs — were invited to the country as guests of the Simon Wiesenthal Center, a US-based Jewish human rights group. Representing the first publicly known delegation to visit Israel from the Persian Gulf kingdom, many saw the trip as a sign of potential warming ties between the two countries.