Little over seventy-five years ago on 8 November 1942, the Allied forces launched Operation Torch in North Africa. The plan was to land in Morocco and Algeria and defeat the Vichy regimes in  both countries. The US asked for the help of local resistance fighters in Algiers. Little did they imagine that a small band of Jewish fighters under the leadership of Jose Albouker would take control of strategic points in the city in the space of 15 minutes. Maurice Ananou, son of Joseph Ananou, a 20-year-old resistance fighter, gave this witness statement (translated by PoNR) to MORIAL, the Association of Jews from Algeria, about his father's exploits. (With thanks to Jocelyne S) 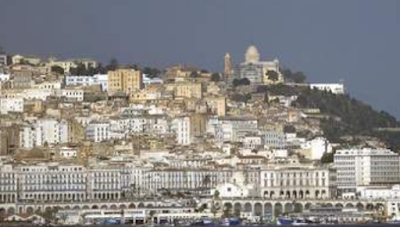 My father Joseph Gilbert Ananou, born 19 December 1922 at Aumale (an Algerian departement) was one of the Jewish partisan irregulars who assisted the Anglo-US landing at Algiers on 8 November 1942.

He was part of Captain Pilafort's group. The captain fell at his side during the capture of the Main Post Office and Central Police HQ on Boulevard Baudin.

That night, they had met up at the home of the Aboulkers (Jose Aboulker led the resistance operation - ed) on rue Michelet.

He was almost shot by the mobile guards at the entrance to the Post office when an officer said, 'Frenchmen ought not to fire on other Frenchmen.' I don't know how many times my father repeated the long-awaited coded message 'Robert arrive.'

He said very little about his subsequent imprisonment in the south of Algeria. I know that he was asked during his internment to give away to some poor blighter in trouble the 'Croix de guerre' or medal he was due to receive. He agreed to do so: he had done what he had to do.

In a speech on the North African military operations General Murphy  had declared that the resistance fighters of Operation Torch had enabled the Allied landings on the beaches of Sidi Ferruch and thus had changed the course of world history!!!

Among the names mentioned by M. Gozlan (another witness) was my uncle, Joseph Bouchara and his brother Fernand. They were friends before they became in-laws with Sam Bendavid: his children were in my class with me in Algiers and left for Israel in 1962. So did Albert Azoulay who lived in my block and took me to the school on the rue Lazerges every morning together with his daughters. Raoul Cohen Addad later became financial comptroller and gave my father, among others,  a hard time after the war....

(An aside to Isidore Senego: If my father did not receive a citation it's  perhaps because he did not want the honour and another would have benefitted from it.)

Let's not forget that he was only 20. When asked, what did you do in your twenties, he would have said, the same as they did.

The 300 - 350 resistance fighters would have made up most of that age group. They all knew each other and had all been mates, they were part of the Algerian-Jewish community at the time.

I was a child, my father was a good story-teller, I liked history and he was part of history. He was my hero.

Nonetheless all of them were traumatised when their French nationality was not immediately restored to them. Long after the landings, they had ID cards which said 'Indigenous Jew.'

Then they joined the French army. My father was in a transport unit. For a time he was a driver for Marechal de Lattre de Tassigny. But he was let go because my father bit his nails and the marshal could not face being driven  by someone who was driving with one hand, putting his august personage's life at risk.

In 1943, he entered Tunis and always had fond memories of the Jews who invited him into their homes for Passover.

Then came the landing in Naples and my uncle fought at Monte Cassino where the battles were as awful as in the Belfort Gap, where he served as stretcher-bearer.

After Italy came the landings in Provence. My father was the driver to General de Monsabert. They ascended the valley of the Rhone to Dijon. He became aide-de camp to  General de Larminat. When the villages were liberated the (soldiers) were welcomed magnificently. It was then that he discovered France.

There were tough battles at Belfort and in the Alsace plain: many regiments perished.

He told the story of having his photo taken by the town photographer at Vesoul, who placed it in his window. His little brother happened to pass by, recognised him and thus they were reunited after two years of graft without news of one another.

They marched into Germany - Stuttgart. At Lake Constance he saw the greatest fireworks display on 8 May 1945. From Berchestgaden to Berlin, they went for a drive in Hitler's Mercedes, which consumed 50 litres of petrol every 100 kilometers. The high point of the trip was when the French army gathered all the Jews and provided them with a Rosh Hashana or Yom Kippur meal in September 1945 at the Aubette de Strasbourg.

He ended the war having received an honorary officer rank in the French army.

For me, the 8 November was the road I followed every day to school.

Sidi Ferruch was an immense beach: you could take your car on it and park it by the sea and from time to time you had to dig it out of the sand. There was a shack made of planks with the most basic of toilets. There was also a promontory with a huge cuboid monument to the landings of the French troops in 1830 and beyond, a fish tank where you could eat fresh mussels.

Later, when our parents' situation improved, it became a small hotel-restaurant where we used to start the swimming season at Whitsun.

There is a good description of Operation Torch on Wikipedia and I have some good cassette tapes on the first historic Allied victory. Lately there was programme  on Operation Torch attributing to the Gaullists the reasons why the victory did not earn its rightful place in the history of the resistance. I visited the Shoah Memorial in Paris. The massacres of the Jews are well documented, as well as their acts of resistance.

I remember seeing a room recording the different phases of WW2 and if I remember rightly all the military operations, beginning with the victory in the East at El-Alamein which was meant to end the Afrikakorps' grip on north Africa. and in the West, the Anglo-American landings in Morocco and Algeria.

The final battle was in Tunisia but I never saw  it commemorated  as the first Allied victory owing to the fact that the resistance fighters were not directly affiliated with Gaullism. I had hoped to find a trace of such an event - perhaps it was because few people died.

There were few Germans in Algeria and Morocco but there were Italians. In Tunisia, on the other hand, the Germans made their presence felt. They deported  Jews to concentration camps in Poland and Germany, in fact  their first victims were Jews from eastern Europe who had managed to escape their persecutions. I can understand why the Shoah Memorial Museum left out North Africa, in relation to the immeasurable disaster on continental Europe, but you can't not mention it.

One can draw parallels with the Warsaw Ghetto uprising a few months later, from January to Easter 1943. What do these acts of resistance have in common?  Both involved a majority of Jews fighting against Nazism. In one case, many perished. In the other, almost all survived. In the first case, it was a last stand of despair, in the second, it was a fight for hope, and what better symbol of hope than the United States of America.

Email ThisBlogThis!Share to TwitterShare to FacebookShare to Pinterest
Labels: Holocaust in Arab and Muslim lands, Jews of Algeria, Testimonies