Peace is not possible without justice for Jews

Powerful piece in the Huffington Post to coincide with the Memorial Day for Jewish Refugees from Arab lands,  by Israeli of Yemenite parentage Shahar Azani and Emily Schrader. 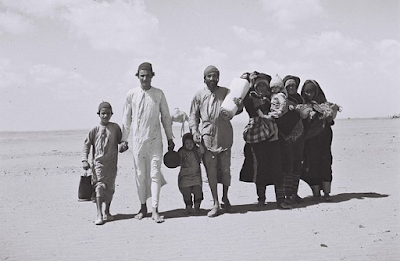 Yemenite Jews on their way to Aden

From Yemen they fled, as they did from Iraq, Libya, Egypt and elsewhere in the Middle East. This year on November 30, Israel will remember the 875,000 Jewish refugees from Arab countries, who left everything behind, as they ran for their lives and returned home to the newly re-established State of Israel. While recognition within Israel is needed and welcome, this is not the case with the international community, so far failing to seriously acknowledge this issue, not to mention discuss reparations for the forgotten refugees.

Every year Kristallnacht is solemnly remembered – one night of virulent antisemitism which marked a turning point in the Nazi barbaric campaign of genocide against the Jewish people. Yet, even though so many ‘Nights of Broken Glass’ occurred all over the Arab world, those seemed to have escaped world attention. The history of persecution of Jews in Arab countries is an undeniable fact, yet we see no hint of an international community willing to address it, or even recognize its mere existence! Acknowledging the pain of so many who left so much behind as a key for future settlement seems to be a well established principle of conflict resolution, yet as far as Jewish suffering is concerned, this suddenly seems inapplicable.

Perhaps most importantly: why is it that despite centuries of expulsions, pogroms, land confiscation, apartheid laws and more, not a single Arab country has been held accountable for their heinous crimes against the Jewish people?!
Scholars dispute the exact amount, but value of property stolen from Jews is estimated to be between $6 and $100 billion dollars, with that in Iraq alone estimated at $30 billion in today’s values. In Egypt, Jews suffered immense persecution despite the fact they had a presence there which predates Islam. In the 1930’s and 1940’s Jews faced murderous riots that left hundreds dead. In 1948, the Egyptian government arrested thousands of Jews and confiscated their property without compensation. In the 1950’s, Egypt expelled 25,000 Jews confiscating all their property and permitting them only one suitcase leaving the country. Today there are less than a dozen Jews left in all of Egypt, yet the government has never apologized or been held accountable for their crimes.
The Egyptians were not unique in their persecution of Jews. In Iraq, Jews suffered numerous pogroms at the hands of pan-Arab nationalists, a Nazi supporting regime in the 1940’s, and radical Islamists. In the 1940’s, Iraq passed a series of apartheid laws against Jews confiscating their property, stripping them of citizenship, and forcing their businesses into bankruptcy. They were forbidden from attending the same schools as non-Jews, holding public office, and a myriad of other discriminatory laws. Jews were publicly hanged in the streets and accused of being Zionist “spies.” Over 100,000 Jews fled the country from 1948-1951. Today, Iraq has been completely ethnically cleansed of its ancient Jewish community.

In Syria, in the 1940’s and 50’s, the Syrian government emptied all Jewish bank accounts and confiscated all Jewish property. Jews were fired from all government positions, forbidden from traveling more than 3 miles from home, banned from having driver’s licenses, and from leaving the country. In Yemen, Jews were given a choice of converting to Islam or death. In the 18th century, the “Orphans Decree” was issued stating that Jewish orphans were to be taken and converted to Islam. This decree was reinstated in 1922. Today less than a handful of Jews remain in Yemen.
There are similar stories of oppression, especially in the 20th century, of Jewish communities in Morocco, Tunisia, Libya, Lebanon, Algeria, and even Iran. Remarkably, many of these refugees came home to Israel and miraculously built flourishing lives for themselves and all those around them. But the story of their oppression must be told if we are to pursue any chance of peace in the future.
Israel is not a perfect country, but for all the criticism of the Jewish state, it is one of the only countries where non-citizens (Palestinians for instance) can take a lawsuit straight to the highest court in the land, and win their case. Can the same be said of Iraqi Jews whose property was stolen? Of Egyptian Jews whose businesses were confiscated? Of millions of Jews from the Middle East who lost precious family members because of heinous anti-Semitism and Islamic extremism?! The issue before us is clear: How can there be true peace, without justice?

Read article in full
Posted by bataween at Sunday, December 10, 2017

Nice factual article, but the demand for justice is certainly a challenging act to follow, specially from the still dominant Islamo-Arabo-fascism.

I believe that the demand for compensation of the lost assets may be misconstrued by these cretins as money grabbing scheme usually associated with Jews. This is not to say that the amount cannot be paid by the petro-dollars of the Gulf states, in order to lighten the financial burden of countries that do not have the funds (like Egypt, Algeria, Morocco, Yemen). I think the amount can be doubly paid if these cretins put their will and conviction to do so. But they will not, for the simple reason that it will carry a double reckoning of their wrong doings against their old Jewish population. Paying means recognizing their dismal warring and hateful character and loosing face by transferring money to the rightful owners.

I think it would probably be much feasible to these cretin states (most likely their past governments) to first recognize their history and past actions against innocent and defenseless Jewish subjects. Compensation is at the end of tunnel of recognition. If there is no recognition, how would compensation comes to a reality and for that matter the fleeting unattainable peace (as the author seems to suggest - justice as a prerequisite to peace). I will do away with peace, because with these people no lasting peace is possible. One has to look at how these states govern and how their people are governed. I do not see peace among themselves, let alone with Israel. The statistics speak for themselves.

Turkey as a state (and its overwhelming Muslim masses) has still not recognized the Armenian genocide and this after an overwhelming consensus of the contrary. Denial is bliss. And denial of the Jews persecution in Arab lands is even more blissful to these cretins.

agree wholeheartedly with you Sammish. Recognition has to come before compensation. The Arab Muslim world is deep in denial.