Libyan Jew: 'my grandma's head was chopped off'

As part of the Memorial Day events for Jewish refugees from Arab countries, the Houston Jewish community put on a programme in conjunction with the Israeli consulate-general. The Jewish Herald-Voice interviewed Libyan-born Eli Sasson: 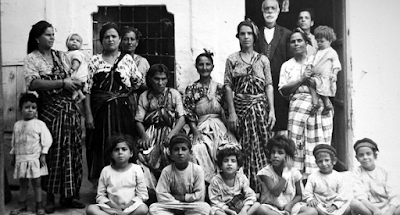 For Houstonian Eli Sasson, the deportation is personal. Sasson and his family lived in Tripoli. They were among the nearly 40,000 Jews who lived in Libya in 1948. Today, no Jews live in Libya.

“From what I learned from my family history, my ancestors came to Libya from Spain,” Sasson told the JHV during an interview in his flood-damaged Willowbend home.

“My father owned a building that had a wine factory on the first floor. We lived above the factory. My uncles ran a hardware store and dealt in real estate. My grandfather from my mother’s side owned a granite factory. They cut granite for tabletops and other things. They imported the stone from Italy. It was a prosperous family.

“We had a good relationship with the Arabs for years until 1945.”

Then, following rumors that Jews had killed Arabs praying at the al-Aqsa Mosque in Jerusalem, Arab mobs attacked the Jews in Tripoli. Some 140 Jews were killed. Rioters looted nearly all of Tripoli’s 44 synagogues, along with hundreds of homes and businesses.

“My grandmother from my father’s side had 10 boys,” said Sasson. “All of them were able to run out from the riots. My grandmother didn’t leave her home. When her boys came back, they saw her head had been chopped off.”

Years later, Sasson’s mother told him that during the pogroms, her mother and she were hiding under a table in their house, hoping the mob would not break their door down. She related the only reason why the mob didn’t burst through the door was one of the rioters worked for her father. She heard the man through the window tell the mob, ‘Leave them! This is the Sasson house.’ The mob continued on to the next house.

“Before the pogroms, life in Libya was good,” said Sasson. “At home, our family spoke a Jewish Arabic. I can speak my parents’ Arabic. but I cannot communicate with Palestinians who speak Arabic. It’s not the same Arabic. My father would write letters in Jewish Arabic. using Hebrew writing. I think the language has disappeared.

“After 1945, my father continued living in Tripoli. He believed the worst had passed and nobody knew that Israel would become a state. Even if they had wanted to leave, they had no place to go.

“In 1948, the Jewish Agency sent representatives to Libya. They called the heads of the community to the synagogues and told them: ‘Now you can go and send your kids to Israel.’ The Jewish Agency sent a ship and told the community that whoever wanted a one-way ticket to Israel, passage was free. Many of the parents were afraid to send their kids. But, two or three of the older boys in my family ran away to the ship without their parents’ permission.”

As a boy, Sasson witnessed the Arab mobs in the street from the balcony of his house. They were chanting “Kill the Jews.”

The period saw an explosion of Arab nationalism. By Dec. 24, 1951, when King Idris I proclaimed the independence of the United Kingdom of Libya as a sovereign state, Arab nationalism exercised a powerful influence, particularly among the younger generation. The brand of pan-Arab nationalism propounded by Egypt›s Gamal Abdul Nasser after 1952, was based on the goals of bringing down Western-backed governments and the liberation of Palestine. Nasser argued Israel was not founded to provide a homeland for Jews but for the creation and maintenance of a colonial structure in the heart of the Middle East.

In Libya, as nationalism increased, so did intolerance of the remaining Jewish community. The government closed Jewish schools. In 1953, Jews became victims of economic boycotts. The Maccabi sports club was forcibly opened to Arab members in 1954.

In 1957, a law was passed requiring Libyans, with relatives in Israel, to register at the Libyan boycott office. In 1958, Tripoli’s Jewish community ceased to be an independent entity. The community now was to be administered by a state-appointed commissioner.

Legal exclusion increased. In 1960, Jews were prohibited from acquiring new possessions, to vote, to hold public office or to serve in the army or the police.

And, things worsened after 1967. Libyan Jews were accused of being responsible, along with Israel, for the war that the Arab states lost.

“As a result of the Six-Day War, the Arabs felt humiliated by the enormity of the Israeli victory,” said Sasson. “After the pogroms that took 18 lives, the Libyan Jewish community was ordered to leave the country. All you could bring out with you was one suitcase and 25 pounds in currency. The community left everything.

“My father owned the building where the factory was located and where we lived. He owned rental properties. I don’t hear people talking about all the property that my father and other Libyan Jews were forced to give up.

“Most people don’t know about this history. Jews were forced out of countries all over the Arab world. I tell stories to my grandkids who are 10, 7 and 5. They need to appreciate every moment they can live in a free society. Here, they can go to school. They can have protection. This is not given to every child in the world. But, I don’t think I can relate to them the background of my grandfathers. It’s so different.”

Sasson often encounters Palestinians in Houston. When they talk politics, he explains that he is a refugee from Libya. The difference is that he doesn’t let the past totally define his future.

“My attitude is instead of crying that you took something from me, let’s create something new,” said Sasson. “Let’s get out of the history of hate. I tell this to all the Palestinians I speak with here in the States.”

Read article in full
Posted by bataween at Thursday, December 21, 2017

Eli Sasson may have been too young at the time to be aware that Libyan Jews began to be seriously persecuted during the period of German occupation of the country, when the Italian rule had already passed. Of course, Mussolini's Italy passed racial laws already in 1938 which, I believe, were also enforced in Libya. But when the Germans took over from the Italians, the persecution became very harsh with forced labor camps as noted in Giado, etc. The American reporter A J Liebling was in Libya during the war and wrote on the condition of Libyan Jews. Also see the American Jewish Yearbook for the war years.