The Israeli government is conducting direct negotiations with family representatives of children who went missing in the Yemenite Children Affair, according to a report by the Israeli Kan broadcaster. The Jerusalem Post reports (with thanks: Lily):

The negotiations, led by chief of staff of the Prime Minister’s Bureau Yoav Horowitz, concern the state’s recognition of the injustice done to the families and its responsibility in the affair. 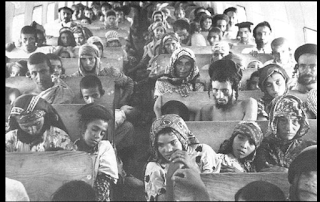 Yemeni Jews being airlifted from Aden to Israel

The affair concerns the mysterious disappearance of hundreds of babies and toddlers of Mizrahi descent, mainly from Yemen, during the early days after the establishment of the state, between 1948 and 1954.

In the vast majority of cases, parents were told in the hospital that their newborn baby had died, though they never received any official confirmation.

Over the years, families have claimed that their children were in fact systematically kidnapped and given away or sold off to Ashkenazi families without the consent of the biological families.

According to the Kan report, the negotiations are in an advanced stage but a stumbling block is the issue of compensation, a demand of the families which has not been met by the state.

More about the Yemenite children affair