Tonight Jerusalem is having its premiere of the film, Remember  Baghdad.    Ofer Aderet of Haaretz has interviewed the main protagonists for an article titled Decades After Fleeing, Iraqi Jews Plan to Return to Their Homeland. The headline is based on the experience of a single Jew, Edwin Shuker, who bought a property in northern Iraq and hardly reflects a trend. (WIth thanks:Imre, Lily) 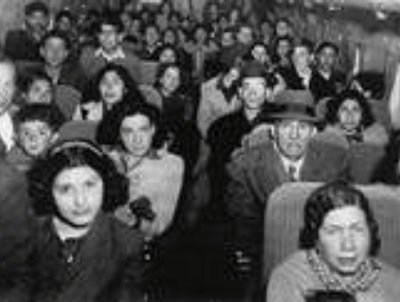 Iraqi Jews being airlifted to Israel in 1950

With the number of bombings down in Baghdad, some Iraqi Jews in places like London and Israel are applying for passports — amid welcoming signs from the other side

The news of the Islamic State’s defeat in Iraq this month brought a smile to Londoner Edwin Shuker’s face. For Shuker, 62, this was another step to realizing his dream – to return to the country he fled 45 years ago.

He took the first step to that end two years ago when he bought a new house in northern Iraq and became, as far as is known, the first Jew in decades to buy a home in that suffering land.

Shuker told Haaretz he knows several other Jews of Iraqi descent who visited the old country in recent years, “but I don’t think there’s another madman who actually bought a house there like me.” The deal wasn’t an investment.

“It was mainly a symbolic act that turns me from just a tourist into a man who wants to settle in Iraq,” he said.

Shuker’s move is indeed unusual, but it reflects a trend in recent years among Jews who left Iraq, mainly for Israel and Britain. The first overtures were made in 2003, after Saddam Hussein’s ouster. They were resumed this year amid the decreasing frequency of bomb attacks in Baghdad.

In December 2016, Iraq Day – a cultural exhibition organized by Iraqi students – was held at Imperial College London. Prominent members of London’s Jewish community were surprised to receive an invitation to exhibit their books about the history of Iraq’s Jews.

“Our stall was the most popular one there and all the books were sold,” says Londoner David Dangoor, who was born in Iraq in 1948 and left when he was 10. As he puts it, the Iraqi ambassador didn’t cringe when he saw that the books had been printed in Israel.

Tsionit Fattal Kuperwasser, whose parents immigrated to Israel from Iraq, didn’t imagine that her first novel, “The Pictures on the Wall,” about the Jewish community in Iraq during the last century, would become a best-seller in her parents’ homeland. The book, which was published in Hebrew in 2015, was translated into Arabic this year and became the first Israeli book to be published in Iraq.

“When I wrote the book I wanted to connect to my Iraqi-Jewish roots; I didn’t think it would be read by Muslims in Iraq as well,” Fattal Kuperwasser says. But in the era of social networks, Iraqi intellectuals, authors and journalists heard of her novel even before the translation and started discussing it on Facebook, in newspapers and at universities.


“They see me as a daughter of Iraqi parents who misses her ‘first homeland,’” she says. “To them I’m a member of the Iraqi nation and they see in me proof that the Iraq of yesteryear, the one they miss, hasn’t disappeared or been forgotten.”

Soon Fattal Kuperwasser found that the taboo on ties between Israelis and Iraqis was cracking. “We talk on Facebook openly and daily,” she says. “They tell me that the light went out on Iraq after the Jews were pushed out and that they want to rectify this injustice and bring us home.”

The ties between Iraqi researchers and Iraqi Jews in Israel was established by Prof. Shmuel Moreh, a native of Baghdad and an Israel Prize laureate for Middle Eastern studies, who died this year. The warm eulogies published in Iraq after his death attested to the yearning to resume ties.

“They mourned his passing, expressed remorse that Iraq lost brilliant people like him, and regretted that he didn’t have a chance to see Baghdad again,” Fattal Kuperwasser says. (....)

“It’s hard to take the fact that we’re gone, that we left forever,” says Shuker, who stayed with his family until 1971. “I feel responsible for preserving the Jewish ties to that country because our story there hasn’t ended yet.”

Two years ago he went to Iraq, returned to the house where he grew up and visited one of Baghdad’s synagogues, which was renovated and restored – but empty.

Unlike others in whom the Farhud trauma was seared for life, Shuker prefers to remember an Iraq where Jews and Arabs lived in peace. He looks for contemporary partners with whom to renew ties.

“There’s a dramatic change in the Iraqis’ attitude,” he says. “They feel they’ve lost a valuable community and acknowledge that Jews were an important part of society there.”


This month the documentary “Remember Baghdad” – the story of Iraq through the eyes of the Jews who lived there for 2,600 years – premiered in London on the 100th anniversary of the British invasion against the Ottomans in 1917.

The movie sheds light on the Jews’ good life in Iraq before they were driven out or fled. It shows picnics on the banks of the Tigris, royal balls and a material and cultural wealth that marked the community in its heyday.

Like Shuker, Dangoor misses Iraq. He remembers the villa on the Tigris where he grew up. His father held the Coca-Cola franchise in Iraq, and his mother was elected Miss Baghdad in 1947. To this day her picture appears on Iraqi websites as a symbol of nostalgia. “Iraq is still in our blood and bones,” Dangoor says.

A delegation from the Iraqi Embassy in London attended the documentary’s premiere. “After the screening they said they were looking forward to the day when Iraqi Jews would be able to visit Iraq,” Dangoor says. The film will be screened in the Jerusalem Cinemateque on Sunday and Monday.

Dangoor has already taken the first step to normalize his relations with Iraq. In London, he has voted in Iraqi parliamentary elections. He says other Iraqi Jews have applied for passports too, but so far in vain.

“Many Iraqi Jews have good, warm memories of life there, which haven’t faded even after the Farhud,” he says. “Many identify with Iraqi culture, music and literature to this day.”

Israeli author Eli Amir’s novel “The Dove Flyer” will soon be published in his native Iraq, where his books have been popular for years. His attitude is different.

“I don’t think for a single moment of going back there, heaven forbid,” he says. “It’s over and done with. We have nothing to go back there for.”

Amir admits that when Iraq is mentioned in the news “it strikes a chord, but I also remember that the Jews were driven out of there as refugees with nothing. So I prefer my Jewish Israeli identity.”

The invitation was to ME personally and I prepared it and manned it with my 2 sons and my partner in my Forum with the full support of David Dangoor.

Unfortunately only handful of London's Jewish community attended to support.

It is quite disappointing that while I did not get the support of our community in London apart from few of my friends and mainly from David Dangoor who made it possible, neither me or nor my Forum was mentioned

In commenting on the recent article in Haaretz entitled “Decades After Fleeing, Iraqi Jews Plan to Return to Their Homeland”, I would like to clarify info re the invitation from the Iraqi students society in Imperial College in London for the Iraqi Jewish community to participate in the Iraqi Heritage Exhibition in December 2016
The invitation was sent to my sister Niran Bassoon-Timan, personally, in recognition of her strong contacts with Iraqis intellectuals and ordinary Iraqi people through the social networks as well as her access to diplomats and journalists. She agreed to arrange a desk / stand in the exhibition where dozens of books about Iraqi Jewry were exhibited; many of them printed in Israel. She manned the stand for the whole day with the help of her two sons and her colleague in Awlad Altaref forum Dhia Kashi. The stand was supported by Dr. David Dangoor who was very enthusiastic about the idea of such stand and of the activities of the forum.
The stand was one of the busiest in the exhibition. Many books were sold and Niran answered many of the questions posed by visitors as well as by several Arabic TV stations. She worked for some three weeks to prepare the book exhibition, together with charts, materials and info related to the history of the Jews of Iraq. The Iraqi Ambassador and the Cultural Attache came to congratulate her for the excellent stand. It was the best publicity one can get. It is a shame that very few of the Iraqi Jewish community in London bothered to participate by visiting and having the opportunity to look at the dozens of books being published in Israel, Iraq, England, Canada and USA about Iraqi (Babylonian) Jews that Niran managed to assemble.
It is disheartening that her role was not mentioned in the newspaper article. She is acting as a real bridge between Iraqis and Israelis of Iraqi roots transferring books in both directions, providing research material to researchers, as well organizing cultural activities with an Iraqi Jewish content with people from different religions intermingling.
Link to video on the event
https://m.facebook.com/story.php?story_fbid=1264274046944908&id=1237164392989207