Another round in the 'hummus wars', this time on Twitter, where Arabs accuse Israelis of 'cultural appropriation' - or even 'cultural genocide'. The truth, as readers of this blog will know, is the exact opposite. Seth Frantzman reports in the Jerusalem Post: 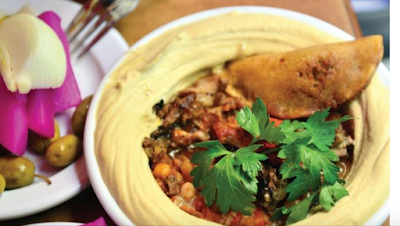 In a Twitter battle that raised eyebrows on both sides of the Atlantic, James Zogby accused Israel of “cultural genocide” after American celebrity cook Rachael Ray posted a photo of “Israeli nite,” with hummus, stuffed grape leaves and other edibles.

Wrote Zogby, “This is cultural genocide. It’s not Israeli food. It’s Arab (Lebanese, Palestinian, Syrian, Jordanian). First the Israelis take the land and ethnically cleanse it of Arabs. Now they take their food and culture and claim it’s theirs too! Shame.”


Bret Stephens, op-ed columnist at The New York Times and a former Jerusalem Post editor-in-chief, joined the battle on Tuesday. “Please tell me this is a joke tweet,” he wrote. “Or is it ‘cultural genocide’ when Arabs use Israeli technology? Do you use Instant Messaging? Waze? If so, please stop.” Waze was invented in Israel.

Zogby responded that the case would only be similar if he used Waze and then claimed it was Lebanese. Zogby’s father was a Lebanese immigrant to the US.

“This isn’t a joke. It’s about a history of cultural appropriate and a systematic effort to erase Palestinian history and culture,” he claimed. There was a ray of hope. “Peace is possible, but not on those terms.”

Read article in full
Posted by bataween at Friday, December 29, 2017


Many Israelites come from arabic speaking countries. So jewish oriental culture and food is natural Israelite.

I never developed a taste for that hummus paste simply because I find it tasteless. In Morocco chickpeas are still prepared and eaten whole. But in Israel if I say I don't like hummus it's interpreted as an anti-Arab political statement.
It's weird, but I wouldn't be surprised if she included hummus and tabouli as a sign of acceptance of the Other.

Silly and infantile bickering about this issue of hummus and tabouli. Sure the second grade cook Rachel should have mentioned the Arab influence at least, what were her producers thinking? Ignorance of cultural diversity I guess, I am not sure. Zogby's cultural genocide idea is stupid and reflect the petulant attiitude the Arabs have of others and their contemptuous bravado of themselves.

To me, chickpeas care less if they are Jewish or Muslim. Chickpeas don't give a hoot about the Middle East; they do not care for either peace or war for that matter. Hummus wasn't mad and had tantrums because of Hamas (name close appropriation). Also, they are feculent legumes that can produce a lots of unpleasant intestinal gazes. I wouldn't want to be in a closed room with lots of people consuming hummus.

Sammish, the ancient philosopher Pythagoras is reported to have avoided eating beans and to have forbidden his disciples to eat them. Maybe for the reason you mention or maybe because the sometimes noisy effects of beans made him think that they represented formerly human souls, since he is said to have believed in the transmigration of souls into both animals and plants.

As to Zogby, you can only charge "cultural genocide" if one nation, Israel for the sake of argument, had tried to erase or wipe out the culture of the Arabs in Israel. But a cultural borrowing is hardly genocide. Many people today might say that pizza and spaghetti are American dishes, although they are originally Italian. Moreover, one of the dishes listed, stuffed grape leaves, is also very common among Greeks. Did the Greeks too commit cultural genocide on this account? Or cultural appropriation --or theft? Furthermore, the Greeks in Anatolia --in former times-- were conquered by Muslims, Arabs and later Turks. So did Greeks borrow stuffed grape leaves from their conquerors or did the Muslim conquerors "steal" this dish from the Greeks? What about souvlaki and shawarma and pastrami/postirmeh? Who stole or borrowed what from whom? The Rumanian Jews, mainly Ashkenazim, ate a kind of kebab called Karnatslakh. The only difference was that the Rumanian Jews put in garlic instead of the spices used in the Middle East. They probably learned kebab from the Ottoman Turkish overlords of Rumania. So is Zogby going to try to collect an indemnity from the surviving Rumanian Jews on the grounds of the cultural genocide involved in karnatslakh? Perhaps he can get Erdogan to be his partner in suing for an indemnity.

As to chick peas, humus [or hhimtsah in Hebrew], the Ashkenazim did not mash them into a paste but chick peas [we called them nahit] were commonly eaten at home and on certain special occasions, like the Ben Zukhor בן זכר ceremony at home after the birth of a boy. And in the synagogue on Shabbat. They seem to have symbolized fertility.

Eliyahu,
Your great examples of food stuff and their recipes reveal the overarching truth that food dishes are not (and cannot be)confined to only one culture or nation. It is simply impossible. They emerge and spread out to the whole world out of necessity and obvious diffusion of ideas and people across the globe since the beginning of time.

This remind me of one great learning epiphany I underwent regarding the supposedly world re-known French cuisine. Before the 13rd century, the French cuisine was literally primitive at best. A diet consisting of cereals and maybe cheese, because of the lack of ingredients (spices) and vegetables than came from the East (Asia) and the West (American continent) after the 15th century. It was Catherine of Medici who introduced and taught the French aristocrats of what now we consider the French way of cooking. The French did not know what eggplants were (originated in Iran) thanks to Marco polo and later expeditions or spices like pepper (great preservative of meat), nor did they know potatoes, peppers and tomatoes (all from the American continent) thanks to the post expeditions that started with Columbus. If someone tells you that potatoes au gratin (with Gruyer cheese or without) is French, you can smile at them because the Incas were having similar cooked potatoes in times immemorial. My point is that dished evolved and change based on local available ingredients and spread everywhere with the marching bands of invadors and political whims.

As for chick peas, in Morocco (I recall) they are used sparingly, added mostly to soups, and of course couscous and other dishes and of course used in the famous Sabbath meal (in winter times) called "Skhina". Hummus is simply not eaten widely in Morocco and Algeria. In fact, I first ate it in France in 1980's at a Lebanese restaurant. I didn't really care much about it.

There is however one chick peas dish that I can recall when I was young, it was a great. My mother used to cook it in Winter times. It is an exclusively chick peas tagine cooked slowly with calves' feet and with Shermoula spices (Paprika, Cumin, and Caraway). It was deliciously good. In celebration of the feast of Pesach, many Moroccan Jewish families would shared a whole sheep or parts of beef carcass whose offal is eaten in a variety of dishes.