Assyrian and Chaldean Christians have returned to their heartlands to celebrate Christmas in parts of northern Iraq for the first time since the routing of Islamic State, Reuters reports.

Like every other resident of Teleskof, this was Daoud’s first Christmas back home in three years, since Islamic State militants overran her town and forcibly displaced its 12,000-strong Chaldean Christian community. 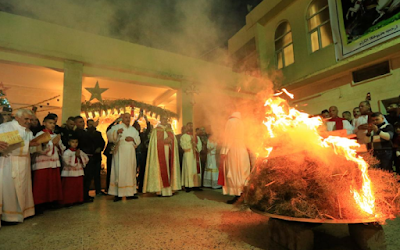 “It’s so special to be back in my church, the church where I got married, the church I raised my children in,” the school headmistress said, tears in her eyes.
Faced with a choice to convert, pay a tax or die, Daoud, like many other Christians in the Nineveh Plains, chose to flee. Most sought refuge in nearby towns and cities, but many sought permanent asylum abroad. Though the militants were only in Teleskof for a few days, residents only began returning home earlier this year.

On Sunday, they celebrated their first Christmas together again at the town’s main church, which was overflowing. Hundreds of congregants, dressed in their finest, poured in to pray and receive communion from Father Salar Bodagh, who later lit the traditional bonfire in the church’s courtyard, a symbol of renewal he said.

Despite the obvious joys of being able to celebrate openly once again, it was a bittersweet Christmas for most across the Nineveh Plains, the epicentre of Iraq’s ancient Christian communities which can trace their history in the country back two millennia.

Read article in full
Posted by bataween at Monday, December 25, 2017

I suggest that this blog be very careful about this article. For years, PONR has been condemning various news outlets for featuring distorted lies about israel. Since this article was from reuters, it is automatically suspect. Are the Christians as hopeless as they are made out to be? Does PONR mean to suggest that this article is unquestioningly true? You don't want to be as guilty as those you condemn.

Of course this is a Xmas feel-good story, but many Christians will not return. If you read to the end Christians say there is no future for them in Iraq.