With thanks: Yoel
It was the selfie that should have said 'peace' between erstwhile enemies at a beauty contest in Las Vegas. Instead, it led to death threats and the banishment of a family. Little did Adar Gantlesman, Miss Israel, and Sarah Idan, Miss Iraq, predict that Sarah's family would have to flee after a selfie showing the two of them posing together went viral. Sarah Idan said that she had Israeli and Jewish friends. Some of those, she said, had been born in Iraq and themselves had had to flee. Miss Iraq, the first to represent her country in a beauty contest for 45 years, refused to take the selfie down. According to this report on Israeli TV, the two beauty queens have remained friends via Skype. 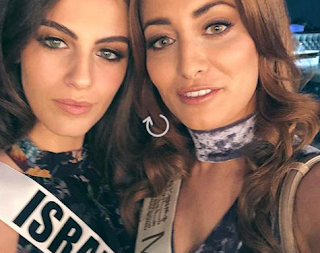 You can't even tell who is Israeli and who is Iraqi. This result should show the world how intolerant people are in the ME but somehow nobody on the west takes any notice. Good on Miss Iraq

It was featured in the local news in Los Angeles. It didn't shake up public opinion but it was covered.