In the spirit of  the King of Bahrain's charm offensive towards the Jewish state, an interfaith  delegation visited Israel on Tuesday where they were greeted warmly. But they were snubbed by Palestinians when they tried also to visit Gaza. Al-Jazeera reports: 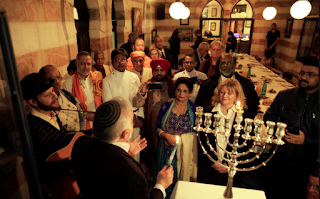 The Bahrain delegation at a Hanucah lighting in Israel

Palestinians have refused a Bahraini delegation from entering Gaza after the group visited Israel amid ongoing controversy over the US decision to move its embassy to Jerusalem and recognise the city as Israel's capital.

The interfaith "This is Bahrain" civil society group defended its visit to Israel on Monday, a day after its trip was reported, as a gesture of tolerance. The 25-member group, which is on a five-day tour, includes Sunni and Shia Muslim leaders, Christians, the leader of a Hindu temple, and a Sikh.

It aims to visit Islamic, Christian, Jewish and other holy sites, the group said, according to a statement carried on Bahrain's state news.

The Palestinian National and Islamic Forces in Gaza said there was no place for those who normalise relations with Israel in Gaza - or any other place of the occupied Palestinian territories. It added that the people of Gaza would prevent the delegation from entering the enclave.

Read article in full
Posted by bataween at Thursday, December 14, 2017