A study of attitudes among Muslim refugees shows that antisemitism is rampant, but that refugees from other minority communities are more likely to side with Jews and Israel. The Times of Israel carries this JTA report (with thanks: Lily):

BERLIN, Germany (JTA) — Anti-Semitism among Muslim refugees is rampant and requires urgent attention, a new study suggests. But the study, commissioned by the American Jewish Committee’s Ramer Institute for German-Jewish Relations in Berlin, also finds that refugees from persecuted minority communities are more likely to take a stand against anti-Semitism and for Israel.
Titled “Attitudes of refugees from Syria and Iraq towards integration, identity, Jews and the Shoah,” the research report was prepared by historian and sociologist Günther Jikeli of Indiana University and the University of Potsdam, Germany, with help from Lars Breuer and Matthias Becker. 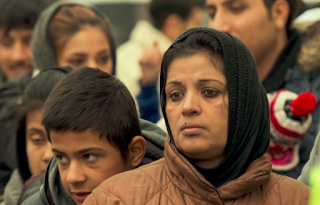 The report, based on interviews with 68 refugees, comes amid a series of virulent anti-Israel and anti-America demonstrations in the German capital denouncing the US recognition of Jerusalem as Israel’s capital. Thousands of protesters burned homemade Israeli flags and crowded city subway stations chanting anti-Israel and anti-American slogans on their way to rallies. The numbers of refugees among the demonstrators was unknown. At the same time, in a show of solidarity with Jewish communities in Germany, local imams joined with Christian and Jewish leaders in public celebrations of Hanukkah, including the annual candle-lighting ceremony at the Brandenburg Gate, where Rabbi Yehuda Teichtal of Berlin was joined in a cherry picker by Mayor Michael Mueller. Security has been tightened throughout Germany and at Jewish venues.