Cases of the authorities preventing the selling or smuggling of Torah manuscripts and scrolls (such as this one in Turkey, as reported in Times of Israel)  arise from time to time in the Arab or Muslim world. The Torah scrolls are invariably considered part of the national heritage, and not Jewish communal property. (With thanks: Lily) 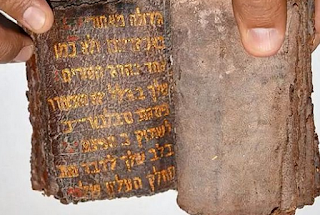 Turkish security forces seized a Torah manuscript earlier this month that is thought to be at least 700 years old and that was up for sale for $1.9 million, Turkish media reported.

Police, acting on an tip, reportedly detained four antique dealers after they tried to sell the manuscript to plainclothes detectives in Turkey’s southern Mugla province.

Three of them were released to house arrest and one remained behind bars.

Read article in full
Posted by bataween at Wednesday, November 29, 2017