The impact of the Suez crisis on Egypt's Jews

Last November was the 60th anniversary of the exodus of 25,000 Jews from Egypt. Lyn Julius examines what happened in Fathom (Autumn 2017): 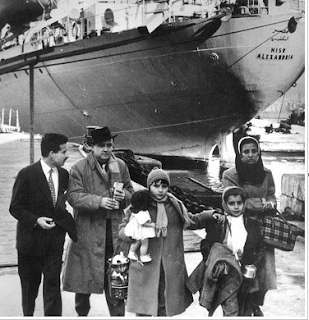 A quarter of the Jews were Egyptian. As a result of an increasingly restrictive nationality policy privileging ‘real Egyptians’, 40 per cent were stateless. To possess a British or French passport did not require the holder to have lived in Britain or France or even to speak the language (of 24,000 British subjects in Egypt, only 45 per cent were from Britain itself and a quarter were Maltese. Of 21,270 French, only 40 per cent were from France; 33 per cent were from the Maghreb.)[1]

In 1948, the repercussions from the establishment of Israel reverberated in the Cairo Hara or Jewish quarter: over two hundred Jews were killed in a bombing campaign between June and November. A first wave of 20,000 Jews fled, mostly to Israel.

In 1952, King Farouk was deposed in a military coup and sent into exile. For the Jews, General Neguib’s meeting with Chief Rabbi Nahum Effendi promised a new dawn. But Colonel Nasser, Neguib’s successor, was to use the Sinai campaign as a pretext for expelling almost 25,000 Jews and confiscating their property.

Invoking emergency laws, Nasser set about expelling British and French subjects. Jews were expelled in two waves: the first (accounting for some 500 Jews) [2] were given 24 hours to leave. The second was ordered to leave the country within two to seven days with their families.[3] Clemy Lazarus, née Menir, was five years old:


As a consequence of the Suez Crisis, my mother, along with all British and French ‘citizens’ were unceremoniously expelled from Egypt. I have a memory of military personnel marching through our apartment delivering the expulsion order.
This caused my parents and grandparents severe heartache as my parents had five children and my mother was, at the time, six months pregnant with number six. She was obliged to leave for England on her own, without her husband, but with five children in tow. She was 24 years of age at the time. She spoke French and Arabic but no English and she knew no other culture than the Jewish/Egyptian one in which she grew up.
She was compelled to leave without any money or possessions of any value. She did, however, manage to buy a few gold bangles that she wore as jewellery for the purpose of sustaining us down the line.

Clemy’s father, being an Egyptian national, was not expelled and remained behind. Clemy’s mother was sent with her children to refugee camps in Leeds and Kidderminster:


After six months my mother was at the end of her tether. My mother is the sweetest, most mild mannered, excruciatingly shy woman. Nevertheless, astonishingly, she found the strength to march into the office of the commander of the refugee camp. She banged on his desk, swiped all the paperwork to the floor and in her best newly-acquired English she declared: ‘Captain Marsh, bring my husband!’ To his credit, Captain Marsh did his utmost to make this happen and shortly afterwards my father joined us in the camps.

Back in Egypt, It became clear that in the initial confusion the authorities themselves were torn between expulsion and detention:


In the anteroom of expulsion countless thousands of Europeans of all nationalities and creeds are relegated in their own interest to house arrest. The entire British community has remained indoors, with two hours in the morning to take the dog for a run. Many have been arrested in shipping offices and on the steps of the British embassy (in the care of the Swiss) owing to clashes between the Egyptian ‘keeping-in authority’ and the Egyptian ‘expelling authority’

By the end of November, the expulsion orders were extended to stateless Jews, as well as those of Egyptian nationality.

The motives of revenge and retaliation meted out to the British and French aggressors were all too apparent in the heartless harassing of those of Jewish faith – whatever the official spokesman may say to the contrary – to Jews of all nationalities, including Egyptian nationals and Jews residing in Egypt with no known national status.[4]

Read article in full
Posted by bataween at Wednesday, November 08, 2017