The Book of the Blog out this month 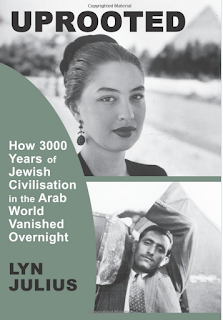 A book quoting the best of the material collected for Point of No Return is to be released on 9 November. UPROOTED by Lyn Julius is being published by Vallentine Mitchell and can be pre-ordered through their website or via Amazon.

Who are the Jews from Arab countries? What were relations with Muslims like? What made Jews leave countries where they had been settled for thousands of years? What lessons can we learn from the mass exodus of minorities from the Middle East?

Lyn Julius undertakes to answer all these questions and more in Uprooted, the culmination of 10 years of work studying these issues. Jews lived continuously in the Middle East and North Africa for almost 3,000 years. Yet, in just 50 years, their indigenous communities outside Palestine almost totally disappeared as more than 99 percent of the Jewish population fled.

Those with foreign passports and connections generally left for Europe, Australia or the Americas. Some 650,000, including a minority of ideological Zionists, went to Israel. Before the Holocaust they constituted 10 percent of the world s Jewish population, and now over 50 percent of Israel s Jews are from Arab and Muslim countries, mostly refugees or their descendants.

This same process is now repeating in Christian and other minority communities across the Middle East.

The book also assesses how well these Jews have integrated into Israel and how their struggles have been politicised. It charts the growing clamour for recognition, redress and memorialisation for these Jewish refugees, and looks at how their cause can contribute to peace and reconciliation between Israel and the Muslim world.

I am trying to get the book in canada, but this link only shows British pound

Are US dollars any good for you?

They are still there! Jews in Algeria and in hiding! I'm doing DNA testing now. These people are in suffering I need help I don't know what 😦 to do