The New York Times has a feature on the shrine in Kurdistan of a little known biblical figure called Hazana - revered by Judaism, Christianity and Islam. But the Jews, and most of the Christians have now fled, so much so that even the NYT cannot call this coexistence (with thanks: Tom): 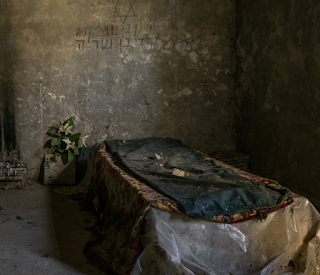 The tomb of Hazana. On the wall, some modern Hebrew grafitti (Photo: NYT)

AMADIYA, Iraq — This once-pretty picture postcard town, on its own 4,000-foot high mesa nestling between a pair of much higher mountain ranges, is in a bad neighborhood when it comes to tolerance.

So the mystery of the Jewish holy figure Hazana, who is revered here by people of all the local faiths, is even more profound than it might otherwise be.
Amadiya is in the semiautonomous province of Kurdistan, which is the target of a crackdown by Baghdad after aiming to achieve independence from Iraq. This part of northern Iraq has been convulsed by violence since the advance of the Islamic State, which sent Christians fleeing, enslaved Yazidi women and killed Shiites on sight, until finally being wiped out in the area last month.

Today Amadiya’s population of 9,000 is overwhelmingly Kurdish Muslim. But in the early 20th century there were said to be about two-thirds that many people, about evenly divided among Muslims, Christians and Jews — although there were 10 mosques compared with two churches and two synagogues. Everyone was packed into a circumference of a mile and a half.

Amadiya’s Jews all left after the creation of Israel in 1948. And so many Christians have left amid successive regional upheavals that the remaining 20 or 30 families can no longer sustain both churches.

All three faiths here are brought together by a longstanding reverence for Hazana, a Jewish religious figure of unknown antiquity — variously described as a son of David, the grandson of Joseph or just a little-known prophet — whose tomb is in Amadiya.

“All the religions are going to that grave to pray,” said Muhammad Abdullah, a local teacher and amateur historian. “For all three religions, it’s a sacred place. Each of them thinks he belongs to them.”

Read article in full
Posted by bataween at Tuesday, November 14, 2017