Doesn't Morocco have a history of harmonious Muslim-Jewish coexistence? It seems not, given that a conference held  to examine the vexed question of religious and minority freedom in the country has been deemed 'controversial'. Report in the Lens Post (with thanks: Boruch): 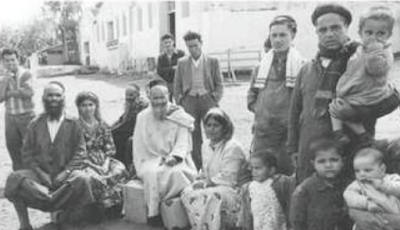 Berber Jews in a transit camp

For an overwhelmingly Sunni Muslim country, which once had a large Jewish population, the conference was highly controversial due to concerns over its motives, especially as there is no official recognition of Moroccans who change religion.

The organisers and religious minority advocates asked the government to clarify laws concerning freedom of worship.

“The state still places barriers when it comes to legal reforms concerning minorities,” Jawad el Hamidi, the coordinator of the Moroccan Commission of Religious Minorities, told AFP. “There is a kind of fear of opening this door and having a discussion – even civil society is still reluctant to talk freely about this topic.”

“We suffer repression and harassment,” said Hamidi, adding that some media had referred to those at the conference as “atheists” and “homosexuals”.
Attendees see the conference as a small step towards achieving religious freedom in Morocco, which suffers from an intolerance of religious diversity.

I am not sure this is an article, it is just a announcement about what is known as a fact (among the few of us). I thought the article to be a bit elaborate. But that's OK. If it takes a dubious conference to announce the fact that under Islam or violent Arab culture that minority rights are a chimera, so be it.

It's an article about Muslim converts to Christianity and Christian status in Morocco. Nothing to do with Moroccan Jews and even less to do with Berber Jews. Please read what you post (and in some cases, what you write).

Jews were the only non-Muslim indigenous minority in Morocco since the 12th-13th century.

There is no equivalency with Jews with regard to the treatment of Christians in the XXth century either, not to mention under Vichy rule, considering that Europeans colonists and their Christian converts lorded over us.

Are you sure the photo is from a transit camp in Israel? This to me looks a lot like the Camp d'Arenas in Marseilles where I myself stayed in transit. Any info?

The person who wrote the Lens Post article mentions Jews in the context of the treatment of other minorities. Although the minorities in question are new converts to Christianity, gays and even atheists, Morocco is not a shining example of tolerance of Jews, given that 90 percent of its Jews have been exiled. Thus I do not think it is inappropriate to use a photo of Berber Jews in a camp (It was wrong to assume this was in Israel, although we do not know for certain that it is Camp D'Arenas).

Sylvia, I have posted two other reports on this same conference. Both mention Jews in the context of lack of tolerance of minorities, one stating that the Jewish population has dwindled to less than 5,000, while the other states that the population of Jews, Christians and Bahais is less than one percent of the total. The first uses a photo of Jews to illustrate the article: I do not think it is inappropriate.

So. A person who may have thrown stones at Jews growing up can convert to Christianity and... abracadabra! he turns from persecutor to persecuted overnight. And you're so sympathetic to anything Christian that you report the same salad not once, not twice, but three times.

Their problem is administrative and political. The Christian community in Morocco has traditionally been a foreign community with foreign passports and citizenships. They have never been subject to the dhimma because as foreigners, they escaped the authority of the sultans.
In order to recognize the Christian community, the Moroccans would have to amend many of their nationality laws, one of them being the law of nationality through filiation. Not simple.

It seems to me that the comments and questions Sylvia was raising are important. I am specifically focusing on the policy claims, which are claims of what should or should not be implemented in response to problem or an attempt to remedy an issue from going from bad to worse, if not mention the possibility of the solving that issue once and for all.

The issue that Moroccans(in this case the government I guess)should amend their nationality laws is, yet again, in my opinion a dead-end issue. Yes, they should change their laws, but what about the Moroccans entrenched prejudices and discrimination against all who do not fit the cultural dominant mold, be it religious, national affiliation, sexual orientation, gender status and I even include regional tribal affiliation. As I have explained before in other blog entries, formal enacted reformed laws are necessary (and praised at times) but are not at all sufficient in bringing about the desired outcome of true cultural and socio-political pluralism.

Morocco, in my opinion, instead of relying on dubious strokes of the pen that changes laws relating to the general minorities rights, should use their Alladin magical penmanship to pass laws that are more specific at targeting the issue of rights such as allowing construction of synagogues, churches, temples, and making sure these come to fruition and allowing people to inquire about religious beliefs and practice freely the rituals. Another one is allowing and protecting gays and lesbians, not by saying so in general, but passing laws that allow gay bars to be constructed, and run freely without hindrance and scorn and making sure perpetrators are punished to the all extend of the law.

And to this, it is incredibly telling of the extreme cultural lag that the so called progressive Morocco is embedded in. If Morocco is, there is nothing to add about all other Arab countries, because the situation is dismal. It is a perennial stumbling bloc for social progressivism and genuine minority rights. The issue is how to translate and convert these PR "grand reformed laws" that seem to so overwhelmingly please the western minded individuals and policy makers, to genuine actions and practices, - in the case of places of worship construction law (ideal) - meaning accepting the places and not reacting belligerently toward them. And to this Morocco is not willing to go forward and make the changes that will truly bring the desired pluralism (or will they). I am pessimistic.

Sammish is cautious about changing laws and their consequences. Rightly so. In the late 19th century the Ottoman Empire legally eliminated the dhimmi status, although Islam remained in a superior position to other religions and their believers. However, this displeased many Muslims who did want to lose their full supremacy. Eventually, the bitter and obdurate Muslims got their chance through the allegedly secular government of the Committee for Unity and Progress [called Young Turks]. They committed genocide against the Armenians and many of the Assyrian Christians, while some Greeks and Jews were caught in the persecution and murders.

After WW One, in 1922, the Turkish nationalist army led by Mustafa Kemal, later Ataturk, drove the Greek army and the Greek civilian population out of Anatolia [Asia Minor], also slaughtering more Armenians. So changing laws does not change mentalities.

I agree with you that what is needed is a change of mentalities. A Moroccan convert to Christianity might still remain an antisemite, as Sylvia says.

It is very sad to see the current Muslim/Arab world in this impossible impasse of utter rejection (if not to say contempt) of anything ideologically non-Muslim. It is a self-inflicted down spiraling trend toward obscurantism and out-right evil. And yet they do not see it.

The Arab/Muslim mentality, my friends, is vey hard to change. I even am willing to say that maybe it will never radically change, until it is faced head-on and overcame to oblivion. This may sounds harsh, but when we look around us, all we see are failed states, institutional dysfunctions, genocidal policies, and psychological and social disintegration.

What would any diplomatic talks yield with these dismal situations? What can Israel,as a state, do? What can Israeli citizens do? And what can Jewish people born in Arab countries do? I have stopped dreaming but I have not yet join the fold with those who accept the rabbinical prediction of the Messianic age and the downfall of the house of Islam.