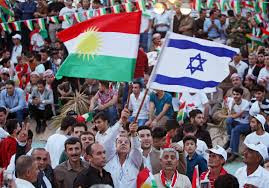 The Iraqi parliament voted yesterday to criminalise the flying of the Israeli flag in the country, Iraq’s Alsumaria reported. This is probably a kick in the teeth for  Kurds who have been waving Israeli flags alongside their own at independence rallies. But it also is in keeping with Iraq's long history of rejecting Zionism.

The move came at the request of the Shiite leader of the parliament’s Citizen Bloc, Ammar Al-Hakim, after the Israeli banners appeared at several Kurdish rallies aftermath of the independence referendum which took place on 25 September.

Iraqi MP, Abbas Al-Bayati, told Alsumaria that “the House of Representatives voted on the unanimously voted a decision to criminalise all who raise the flag of the Israeli entity in the public."

The decision, Al-Bayati added, will be referred to the government to decide on the law’s punishment duration.

Recently, photos of the Israeli flags raised during a number of pro-independence rallies in the Kurdistan region of Iraq and across Europe were circulated across various social media platforms.
The Kurdish government has responded stressing that lifting the flags “does not express its official stance towards the Jewish state.”

Israel has been among the only countries to openly support an independent Kurdish state, and many Kurds have welcomed the support, drawing accusations from Arab leaders that the referendum was a Zionist plot.

Read article in full
Posted by bataween at Thursday, November 02, 2017

fu#$%&* piece of crap iraq what a mistake that venture was. we would have been far better off bolstering the Kurds instead of wasting American lives and money on nation building in iraq. happy to say there were plenty of Israeli flags at this Belfour Declaration rally at the radical leftist cesspool of U.C. berkeley yesterday https://proisraelctu.blogspot.com/2017/11/balfour-centennial-celebration-at-cal.html