Mumbai, London, Singapore, Amsterdam, Miami, San Francisco, Geneva, Washington - just some of the cities where events to remember the exodus of Jewish refugees from Arab lands are being held this week. Israel Hayom reports on forthcoming events in Israel (with thanks: Imre). 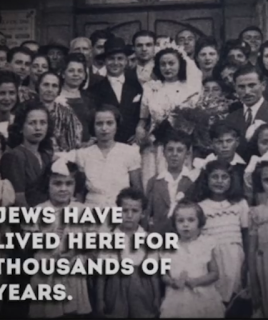 Screenshot from a video clip about Jews of Lebanon, part of a World Jewish Congress series about the exodus of Jewish refugees from Arab lands.

Next Thursday, Israel plans to mark its annual memorial day of the expulsion of some 850,000 Jews from Arab states and Iran. The issue will also be commemorated around the world in the coming week.

On Thursday, representatives from the Aharon and Rachel Dahan Center for Culture, Society and Education in the Sephardic Heritage at Bar-Ilan University will take part in an event at the International Convention Center in Jerusalem to mark the exodus and expulsion of Jews from Arab countries and Iran.

According to Social Equality Minister Gila Gamliel, who initiated the event, "Throughout the 70 years of the State of Israel's existence, the story of Mizrahi Jews has been absent from the history of the Jewish people. We must correct that."

Next week, the Dahan Center will head an academic conference on the subject of Jewish refugeeism from Arab countries at the University of Maryland in College Park, near Washington, D.C. with the aim of exposing the plight of those Jewish communities.

Following the conference, the Israeli Embassy will host a special reception, to be attended by Israeli Ambassador to the U.S. Ron Dermer and Gamliel.

Events of the Day to Mark the Departure and Expulsion of Jews from the Arab Countries and Iran will be held in a number of international capitals next week, including in Europe, Latin America, North America and India next week. The events, organized by representatives of the Foreign Ministry, will include lectures, films and musical performances.

The head of the Foreign Ministry's Bureau for World Jewish Affairs and World Religions Akiva Tor said, "The Foreign Ministry sees paramount value in the presentation of the narrative of the expulsion and refugeeism of Jews from Arab states around the world, as a public diplomacy response and as a commitment to historical justice."

On Sunday, the Dahan Center at Bar-Ilan University hosted a conference ahead of the memorial day.

Speaking at the conference, Dahan Center Director and Chairman of the Alliance of Moroccan Immigrants Dr. Shimon Ohayon said, "For decades, the State of Israel ignored the stories of Jews from Arab countries and thus allowed pro-Palestinians to focus the awareness only on the Palestinian refugees and the Nakba [the Arabic term meaning 'catastrophe,' for the displacement of Palestinian refugees during Israel's War of Independence], without any mention of the heavy price paid by the Jews of Arab countries: pogroms, expulsion and the nationalization of property."

Ohayon noted that over $400 billion in Jewish property was nationalized by the Arab states.

Since the founding of the State of Israel in 1948 to the early 1970s, around 850,000 Jews were either expelled from or fled Arab and Muslim countries.

Don’t make any plans for your weekend as we have already done it on your behalf. Here is your Events & Concert In Geneva list ready. To know what are the events happening in Geneva just bump here and fill the search box. You will be shocked to see countless number of events taking place this Friday, Saturday and Sunday. It is suggested to grab your tickets now to avoid missing any of your favourite events