On the 100th anniversary of the Balfour Declaration and the  40th anniversary of President Sadat's visit to Jerusalem, paving the way to the Israel Egypt peace treaty, Ayman Ashour has written this fascinating article in Egyptian Streets. Egyptians were at first well-disposed to the idea of a Jewish homeland in Palestine, a sympathy that Egypt has tried to suppress. However, Ashour  is on shakier ground when he claims that Egyptians saved  Jews from the Nazis - rescue efforts were limited and the sympathy of the great mass of Egyptians lay with Nazism. Alexandrian Jews fled the city for old Cairo and businessmen whose names were blacklisted left the country altogether. It is not true that mainly Ashkenazi Jews left for Israel after 1948, and that Egyptian policy towards its Jews was antisemitic only after 1967. Stateless and Egyptian Jews were expelled after 1956. 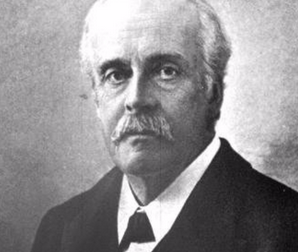 Contrary to widespread belief, in 1917, and for over a decade after that, the Balfour Declaration was not seen by most Egyptian intellectuals as detrimental to Palestine. Interestingly enough, some Egyptian Muslim and Christian families held parties to celebrate the declaration. Telegrams of gratitude were sent to Lord Balfour by the then-Governor of Alexandria Ahmad Ziour Pasha, a Muslim.
“The Governor of Alexandria Ahmad Ziour Pasha – later Prime Minister of Egypt – went to a party in the city celebrating the Balfour Declaration, that culminated in their sending a telegram to Lord Balfour to thank him,” according to Leila Ahmed in “A Border Passage”.
A delegation of leading Muslims and Christians traveled to congratulate the Jews of Palestine. Many Egyptian Zionist leaders were also Egyptian nationalists and fully committed to the cause of independence from Britain.

Egyptians support of the Balfour Declaration lasted beyond 1917. The Grand Sheikh of Al Azhar officially hosted Chaim Weizmann, co-author of the draft of the declaration submitted to Lord Balfour, when he visited Egypt on his way to Palestine in 1918. The Grand Sheikh was alleged to have made a donation of 100 EGP to the Zionist cause, Egyptian academic and writer Mohamed Aboulghar in his book about the Jews of Egypt confirms the meeting but alleges that actually a donation was made by Weismann to Al Azhar. Weizmann’s cultivation of regional support for the Zionist movement extended to his efforts with the rulers of Hijaz where he executed an accord with Emir Faisal endorsing the Declaration.
The Hebrew University was one of the early dreams of the Zionist movement, in 1918 construction commenced. Ahmed Lutfi el-Sayed, the renowned Egyptian nationalist, political leader and first director of Cairo University joined the celebration for the grand opening of Hebrew University in 1925. In 1944, Taha Hussien, one of Egypt’s most influential literary figures also visited the Hebrew University. 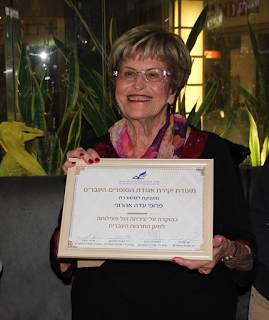 Professor Ada Aharoni was given a special award for her books on Egyptian Jews and their uprooting, From the Nile to the Jordan and Thea Wolf: the woman in white.
Posted by bataween at Tuesday, November 21, 2017

Thank you for publishing my Award as "Honorary Writer and Poet", by the Israeli Writers' Association. The Head of the Organization, Zvi Nir, announced that I am the first writer to get this Award in Haifa and the North, and the third one in Israel. Shalom, Ada Aharoni