At a dinner to celebrate the 100 years since the Balfour Declaration offered British government support for a Jewish home in Palestine, the British Prime Minister Theresa May made history yesterday when she referred to Jewish refugees from Arab lands. In spite of statements emanating from the British Foreign Office ignoring their rights, Mrs May's reference suggest that the message about Jewish refugees is getting through at the highest level. Report in the Jerusalem Post (with thanks: Nelly) 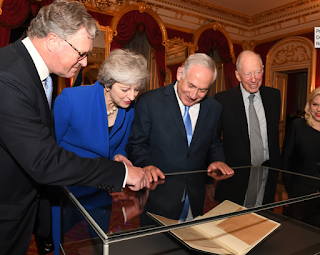 
In recognizing the importance of giving the Jewish people a homeland, Balfour did not ignore the rights of others who lived that region, she said.

“Balfour wrote explicitly that 'nothing shall be done which may prejudice the civil and religious rights of existing non-Jewish communities in Palestine, or the rights and political status enjoyed by Jews in any other country,'” she said.

But his full vision was not fulfilled when the Jewish state was created in 1948, May added. This includes “the Jews forced out of their homes in Arab countries in 1948” and  “the suffering of Palestinians affected and dislodged by Israel’s birth.”

Both events were “completely contrary to the intention of Balfour to safeguard all of these communities,” May said.

“Balfour had a vision of co-existence that has yet to fulfilled,” she added.

May continued, in the spirit of his document there must a renewed commitment to create a two-state resolution to the Israeli-Palestinian conflict.

Read article in full
Posted by bataween at Friday, November 03, 2017

"In the spirit of his document there must a renewed commitment to create a two-state resolution to the Israeli-Palestinian conflict." In other words, she wants to rip Jews away from their heritage (that they won back in a defensive war), something that Balfour had also recognized. So does she support Israel or doesn't she?

Yes, yes, there is something of a contradiction in her words, but one must applaud the mention of Jews in Arab countries, the first ever by a British PM or European leader.