Beirut has a renovated synagogue, but Jews are so terrified of reprisals that they enter wearing facemasks. The community is in hiding, Shadi Bassil writes in the New Mexico Jewish Link: (with thanks: Boruch) 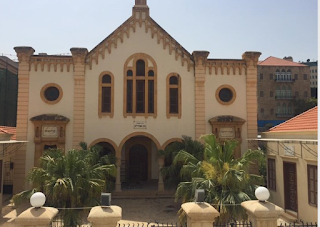 In 1848, some Jewish families came to Mount Chouf seeking sanctuary from growing anti-Semitic violence in Damascus. During this period, the Lebanese-Jewish community settled in Sidon, Hasbaya, and Beirut. Also, Jews immigrated to Beirut from different parts of the world, where the city’s Jewish quarter was home to Ladino-speaking Sephardic Jews, Arabic and Berber speaking Jews from Morocco, and French-speaking Ashkenazi Jews.

Their presence ultimately proved to be pivotal to the economic growth of Lebanon’s most important city. Beirut’s Jewish quarter, Wadi Abu Jamil, became the center of Jewish worship in the city when the Magen Abraham Synagogue was constructed. Even after the neighborhood was deserted at the start of the civil war, it remained known as the Valley of the Jews.

Currently, Wadi Abu Jamil has virtually become Beirut’s safest neighborhood because of its proximity to the Grand Serail, the seat of Lebanon’s Prime Minister, in addition to the offices of several Lebanese politicians.

It is specifically from there, in Wadi Abu Jamil, that the Jewish community is attempting to rebuild itself, and rise from the ashes in a neighborhood that was reduced to rubble during Lebanon’s destructive war. This attempt was put under the spotlight when finally, after a lot of political back and forth, the decision was made to renovate the synagogue.

The main issue was obtaining guarantees from Hezbollah, Lebanon’s most dominant political party and paramilitary organization, for the safety of the workers involved in renovating the structure and the community members it was going to serve. Hezbollah subsequently came out with a statement welcoming the idea behind the project, and declaring that it had no problem with Lebanese Jews as long as they rejected political Zionism and denounced Israel.

Despite those guarantees, Jewish workers refused to enter the premises without wearing face masks, owing to their fear of public reprisals. After everything lined up politically, the project received a green light and some funding was obtained from Solidere, a private contractor very close to the Lebanese government, while the rest of the funds came from donations collected by the Lebanese Jewish Community Council and its president Isaac Arazi.

The renovation was mostly completed around 2010, but the synagogue remains empty. It is very difficult to gain entry onto grounds on the account of tight security. To date, no services have been held there since the project was completed, and the community it was intended to serve is still more or less in hiding.

Nevertheless, the renovation holds more symbolic value than it does practical, because it establishes some sort of the recognition coveted for generations by a community that felt abandoned and unwanted. In a place as volatile as Lebanon, no one knows what the future holds for Lebanon’s remaining Jews, but tiny specs of hope such as this one are a welcome change.

Posted by bataween at Wednesday, November 22, 2017