It takes Haisam Hassanein, an Egyptian Muslim, to give this accurate Wall St Journal portrait of the Mizrahim he met in Israel. His conclusion is correct:  if only the Palestinians absorbed their refugees as effectively as Israel did its Jews from Arab lands. But he makes the assumption, as many do, that the culture of Mizrahim was Arabic, when for many it was French. (with thanks Gavin; Lily) 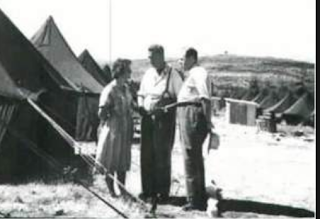 Thousands of years ago, Abraham and Sarah went from Israel to Egypt. So did Jacob and his sons. In my lifetime, I have made the reverse journey, traveling from Egypt to Israel by way of the U.S. During my travels I quickly discovered that the presence of the Jewish people in Arab lands did not end with the Exodus.
As a child in Egypt, my image of my Jewish countrymen was shaped by the numerous Egyptian television dramas that depicted them as spies, thieves and fifth columnists. I never knew any Jewish people personally. Naturally it came as a shock when, during my first visit to Israel in 2014, I met a man who spoke to me in perfect Iraqi Arabic, laced generously with profanity. He introduced me to the concept of “ Mizrahi Jews,” or those from the eastern lands.

For more than a thousand years the Mizrahi Jews lived and thrived in a wide swath of land, from Morocco to India and Central Asia. Some arrived in biblical times while others came after their expulsion from Spain in 1492. Often treated as second-class citizens, they nonetheless created a culture as diverse and distinctive as the places in which they settled.

But this story came to a crushing end for most Jews in Arab lands in 1948, when states like Yemen and Libya responded to the creation of the state of Israel by forcing out their Jewish populations. Since 2014, the Israeli government has designated Nov. 30—the day in 1947 when the United Nations voted to partition Palestine into Jewish and Arab states—as the “Day to Mark the Departure and Expulsion of Jews from the Arab Countries and Iran.”

When I attended graduate school at Tel Aviv University, I befriended Egyptian Jews who were good, kindhearted people. They invited me to their Shabbat dinners, where we ate delicious Egyptian dishes, shared our love of Arabic music and culture, and discussed politics. I felt at home.

In the heart of Tel Aviv I met Rachmo, a vivacious 73-year-old Egyptian Jew whose restaurant served falafel made of beans in the Egyptian style, rather than the Israeli-Levantine version made of chickpeas. Still a proud Egyptian, he had mounted pictures of the pyramids and the sphinx at the entrance of his shop.

In perfect Egyptian Arabic, he described the trauma of immigrating to Israel with his family at age 13. After escaping persecution in Egypt, his family was placed in a camp in Israel, where his upper-middle class parents had to work in construction to earn a living. Living in a land settled and dominated by European Jews, or Ashkenazim, they often felt denigrated by their Jewish brethren. “They did not know that we Egyptians were more cultured, polite, and not troublemakers,” he told me last year.

Like many immigrant groups, Mizrahi Jews sometimes felt the price of acceptance was full assimilation, or abandoning their old culture. Many of the succeeding generations do not speak Arabic or observe their unique customs. One of my professors in Tel Aviv once said in class that as a child of Iraqi immigrants, he used to brag among his peers that his father spoke English and French. He never mentioned Arabic.

At the same time, Mizrahi Jews remember all too well the discrimination they suffered in the old country. Many Iraqi and Morrocan Jews in Israel were alive when persecution was at its worst in the 1940s and ’50s. Some continue to harbor a bitterness that drives them to support Israel’s far-right parties. “The Ashkenazim will never understand the Arabs as we do,” a friend recalled his grandmother’s admonition. “They only know about the Holocaust.”

But today the landscape has changed as Israeli society becomes more inclusive. Eastern Jewish culture is honored. Intermarriage between Ashkenazim and Mizrahim is a nonissue. The Mizrahi Jew Avi Gabbay heads the Israeli Labor Party, the current main opposition party and historic domain of Ashkenazi Jews going back to the Zionist ideologues of Europe.

As a Muslim, I am acutely aware of the hundreds of thousands of Palestinian refugees who have been left to languish in camps for decades, unwelcome in the lands of their Arab and Muslim neighbors. Most recently, Syrian refugees are isolated in tent cities or face discrimination when they try to integrate into new countries. The successful absorption of Jews from eastern countries in Israel—across linguistic and cultural barriers—is a modern-day success story that deserves to be remembered, celebrated and emulated.

The mizrahi Jews cannot be arabs because they was there before the arab conquest of the Middle East.