Refugee message is getting through in UK

After years of silence on the 850,000 Jewish refugees driven from Arab countries, Point of No Return is delighted to report that the message is finally getting through. In the corridors of power at Westminster, the MP Matthew Offord mentioned the refugees from Arab countries in a discussion to mark the centenary of the Balfour Declaration, in which Her Majesty's government 'viewed with favour the establishment of a national home for the Jewish people in Palestine'. You can hear the relevant passage in his speech about 15 minutes into the video.
The issue of Jews from Arab countries was also raised at the October plenum of the Board of Deputies of British Jews, also marking the centenary of the Balfour Declaration. The Israel Ambassador to the UK, Mark Regev said (one hour and nine minutes in) that the third component, and last part of the Declaration, calling for the rights of Jews in any other country to be respected, had been disregarded - not just in Europe, but in Arab Countries. Baroness Ruth Deech (pictured) forcefully reiterated the point, one hour and 19 minutes into the video.
"Where are they now?"she asked, of the Jewish communities of Morocco, Iraq and Libya. 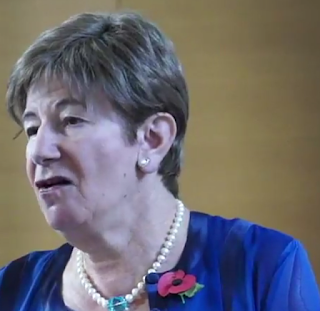