Prickly discussion on the 'Right of Return' for Palestinians

Haaretz has been carrying an interesting exchange on the Palestinian 'right of return' for refugees. The radical leftist Uri Avnery breezily ignores the rights of Jewish refugees in the discussion. While a rebuttal letter in response mentions Jewish refugees, the author makes the mistake of demanding an equal right of return for Jewish refugees to Arab lands.

I think there is a vast difference between principle and implementation. The principle cannot be denied. It belongs to the individual refugee. It is anchored in international law. It is sacred. Any future peace agreement will have to include a section affirming that Israel in principle accepts the right of return of the Palestinian refugees and their descendants. No Palestinian leader would be able to sign a deal that doesn't include this clause. I can picture the scene: After agreement is reached on this clause at the peace summit, the chairman will take a deep breath and say, "And now, my friend, let’s move on to the real problem. How are we going to resolve the refugee problem in practice?" 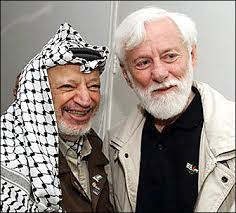 The following response to Uri Avnery from Joseph Grinblat appeared in Haaretz:

I agree that it is not a problem for Israel to accept the right of return of the Palestinian refugees. But not for the reason Mr. Avnery gives.  The word “return” is very clear; it means going back to where one has been before. So it can apply only to the people who left Palestine, not to their descendants who were born in another country.

There are less than 100,000 survivors from the 700,000 Arabs who left Palestine and became refugees, and they should be allowed to come back to Israel if they wish to, and if they are ready to live in peace with their Jewish neighbors, as is stated in the UN 1949 declaration about Palestine refugees, which mentions only the refugees but not their descendants: “Palestine refugees wishing to return to their homes and live at peace with their neighbors should be permitted to do so at the earliest practicable date.”

This applied to Jewish refugees as well as to Arab refugees from the war in Palestine.
The six million descendants should have been integrated in the countries where they were born. They are not refugees from Palestine, because they have never been there. There is no other example in history where descendants of refugees are still considered to be refugees, three generations later.

My comment: Uri Avnery is wrong to assume that a 'right of return' is a sacrosanct principle of international law. Article 13 of the Universal Declaration of Human Rights has never applied to Palestinian refugees. A 'right of return' was added at the last minute and was intended to underscore the rights of hostage populations to leave their countries. Besides, the Palestinian refugees were never citizens of Israel.

Besides, Avnery is wrong to say that the Arab refugees were 'ethnically cleansed'. They fled a war zone. The Jews, on the other hand, were banished from areas which fell to the Jordanians and Egyptians. The question remains - whether anything should be owed to a  population who violated international principles by waging a war of aggression.

Grinblat is right that the definition of refugee should only apply to the actual refugees and not their descendants, but is wrong to even to entertain the idea of return for 100,000.

Israel has no obligation to allow Arab refugees to return 70 years after they left.
The existence of an equal number of Jewish refugees for whom return to Arab countries is dangerous should put paid to this notion, once and for all.

The point he should be making is that an irrevocable exchange of refugees took place. Neither set should be allowed to return.

Oct. 22, 2017
What are the real points to be made ? It's not merely that a "population exchange has already taken place". That point was made in 1984 by Joan Peters {and many others} in FROM TIME IMMEMORIAL". It's that both the "population exchange" and associated land transfers are not yet completed: It's the only language that the bred-in-the-bone genocidal masses of Islam understand. e.g. All of Judea & Samaria, all of Sinai. Not to mention a final reckoning with Islam on the Indian sub-continent, where the body-count of Islam's abattoir political culture has claimed tens of millions of lives. The two are not unconnected. And if we are really looking at unresolved "RIGHT of RETURN" issues & unacknowledged acts of genocide,the present boundaries of Turkey are even more in question than the bizarre claims of the "palestinian" hoax; For example: The restoration of the lands of historic Armenia as compensation for the typical Islamic genocide carried out against the Armenian nation from 1896 to 1921.. The worst is yet to come: For the Muslim orient;And its aggressive,murderous and parasitic masses in Europe & the Americas.

This exchange was between two bickering Zionists (Avnery and Grinblat) in a Zionist paper. This would have been a perfect time to bring up the case of the Palestinian Jewish refugees who were made refugees due to the Arab bloodbaths in the 20s and 30s as well as during the War of Independence (or from an Arab POV, the War of Annihilation). But since both commentators are Zionists, which means no iota of humanity toward Jews at all, this bit of history was totally ignored.

To Norman Roth, the Armenian genocide continued at least up to 1922 [not 1921] culminating in the Smyrna Affair of that year in which the Greek population, the majority, of Smyrna, now Izmir, was driven out while the Armenians in the city were massacred. See below:
There was a precedent for throwing a hated ethnic group into the sea: In 1922 Turkish nationalist forces led by Kemal Ataturk drove the Greek population of Smyrna into the sea. Smyrna had been a Greek-speaking city for more than 2,000 years. It remained predominantly Greek in population even after the Ottoman Empire conquered Smyrna from the Greek-speaking Byzantine Empire hundreds of years before 1922. Smyrna also had a Turkish-Muslim minority, a Jewish quarter, an Armenian quarter, and many Europeans and Americans who had come for purposes of trade or were there for religious/missionary purposes. There were also Levantines, people with mixed European and Greek or Armenian ancestry. These Levantines too were mainly involved in trade and services for the European and American communities. In 1922 the Turkish nationalist army of Ataturk drove the Greeks out of the city, while it massacred the surviving Armenians in the city and set fire to Greek and Armenian neighborhoods. Meanwhile, the fleets of the major Western powers sat at anchor in the harbor of Smyrna. They had orders not to interfere with the slaughter perpetrated by the Kemalist forces and were reluctant to help the refugees. Greece sent a motley assortment of boats to take out the refugees, including surviving Armenians. Since the expulsion of the Greeks and the massacre of the Armenians, the city has been officially called Izmir. This is a historical precedent for what those Arabs may have been thinking who called for driving the Jews into the sea, as walt-mearsheimer admit they said.
Sources:
Ernest Hemingway, "On the Quay at Smyrna," in In Our Time [starting with the 1930 edition of the anthology In Our Time; New York, Scribner's]. This is a fictionalized account of the events at Smyrna that rings true. Hemingway was a reporter in Anatolia and the Balkans in that period. See his description of a Kemalist official in this post.
George Horton, The Blight of Asia -- Horton was the US consul in Smyrna in 1922, that is, he was an eyewitness.
Marjorie Housepian, The Smyrna Affair

The above accounts of Smyrna in 1922 is part of a blog post here below:
http://ziontruth.blogspot.co.il/2007/10/gem-of-absurdity-from-walt-mearsheimer.html

To Davsil, few in Israel would call Avneri a Zionist nor haaretz a Zionist newspaper. They are both considered anti-Zionist. Mr Grinblat lives in New York and may or may not be a Zionist. He is a former UN employe. As to Avneri, there are a lot of questions. He is a fit companion and comrade for arafat since he has few honest bones in his body. But maybe compared to arafat he tells the truth once in a while. And where did Avneri get the money to first buy then support his weekly rag, Ha`Olam haZeh, one of the first or maybe the first porno rag in Israel? What are his connections abroad?
Why did the pro-Arab Middle East Journal, published in Washington, DC by the American Petroleum Institute, publish a very favorable article about Avneri some years ago. He once wrote in a letter to the Jerusalem Post something to the effect that his Gush Shalom group was mainly financed by small family foundations in the US, whoever or whatever they may have been or covered up for.

Thank you for your additional comments that provide another historical illustration of what the great Orde Charles Wingate said circa 1940:"Islam is in a state of decadence. Mad societies, they will one day turn the world upside down. If they ever get the upper hand,their only instinct will be to annihilate their adversaries".
If you're looking for the last word in non-stop annihilationist energy and you have lots of patience for historical detail,plus an extra strong stomach,I suggest you pursue further what may well be, in terms of body count,the most appalling genocide in recorded history...The deliberate & enthusiastic slaughter of an estimated 50 million plus Hindus by "guess who" over an approximately 50-60 year period during the 1500s.I was introduced to this unbelievable,bestial horror decades ago,by Indian {Hindu & Sikh} professional and later on business colleagues. Doesn't that explain more than a few heavy weight conflicts that still burden civilized humanity,both East & West ? And the closer relations that have been developing between Israel & the Indian nation since 1995.
All the best to your endeavors on this subject. We expect to learn a great deal more from you.
Yours unanonymously,