New head of UNESCO is of Moroccan-Jewish descent

A day after the US and Israel announced their departure from UNESCO in protest at its anti-Israel bias, the body elected a Jewish woman of Moroccan descent to be its next head. Audrey Azoulay is the daughter of Andre Azoulay, the adviser to the king of Morocco. Both he and his wife Katia Brami are from Essouira (Mogador) but their three daughters were born in France. 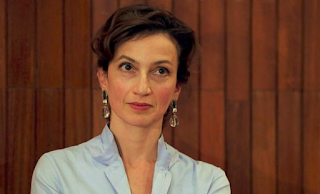 Audrey Azoulay: grew up in a very leftwing environment

France’s Audrey Azoulay, chosen Friday to lead UNESCO, said following her election she believed member states must “get involved” in the organization and “not leave it,” a day after the US and Israel announced their plans to withdraw. Stressing that the United Nations Educational, Scientific and Cultural Organization was going through difficult times, Azoulay said, “In a time of crisis, we need to be more involved than ever, seek to strengthen it, and not leave it.”

Azoulay reiterated that the “first thing she would endeavor” if confirmed by the General Conference in November, would be to “restore the credibility” of the organization and the confidence of member states. Azoulay was named to head the UN’s embattled cultural agency on Friday, beating her Qatari rival after a politically charged contest clouded by Gulf tensions and accusations of anti-Israel bias. Azoulay, 49, came from behind after six rounds of voting to defeat Hamad bin Abdulaziz Al-Kawari, also a former culture minister, after he failed to pick up support from other Gulf states which are part of a Saudi-led coalition blockading Qatar. The vote was 30 to 28.

The campaign to succeed UNESCO’s outgoing chief Irina Bokova was overshadowed by Washington’s announcement Thursday that it planned to withdraw from the Paris-based body after years of tensions over decisions seen as critical of Israel.

Who is Audrey Azoulay?

The youngest of three sisters, Azoulay rose from obscurity to become minister of culture in the Hollande socialist government in 2016. Azoulay has stated that she "grew up in a very left-wing environment" "politicised on the Israel-Palestine conflict". Her views on Israel are unknown, although she was said to have experienced for the first time classic French antisemitism at ENA, the elite school which produces France's political establishment. She spent eight years as director of the Centre International du Cinema.

At Sciences Po she met her husband François-Xavier Labarraque. They have two children.

Both her parents are from Essaouira and retained Moroccan nationality. Azoulay has only French nationality but made visits to Morocco as a child. She does not speak Arabic.

Email ThisBlogThis!Share to TwitterShare to FacebookShare to Pinterest
Labels: Jews of France, Jews of Morocco

It is uplifting and encouraging to see a Jewish woman at the helm of UNESCO. It is unprecedented. Yet with an undeniable cheerfulness about this high office placement,I am still worry about how she will manage this ideologically laden and crass bureaucratic monster of UNESCO. She is a gifted scholar and perhaps the best person for the job, however, UNESCO is no Ecole Normale or one of those countless EU secondary organizations.

She will be in the middle between two grand Alfa male pack of wolves who will tear at each other at her expense. On one side, the neo-cons with their newly found lost identity and activism to stand up for what is right and on the other, the numerous, brash ideologically non-euro centric representatives of countries that are well known entrenched anti-semites, plus some concealed ones from European civilized countries.

My question is how can she succeed in bringing these two crowds together when issues dealing with anything Jewish or Israeli come forth? She will be a target practice at times. Yes, preserving cultural monuments or artifacts, creating events and memorials in all countries reveal no controversies, yet when anything Jewish (whether monuments, cultural or anything) is at the table, a predictable battle will ensue. I am afraid Audrey Azoulay will be attacked for taking sides and being impartial. The anti-semites will see her as an easy target for their usual obtuse and arrogant rants. Then neo-cons will see her as ineffective for not bringing about drastic changes in how the UNESCO is managed, perhaps using their hidden gender bias, given the male dominated bureaucratic organizations. I guess for the belief that Islamic culture requires a strong man to confront it, who know?.

I wish her the best of luck, she will need it. How many cases in human political history are there when you notice some Jews put in charge of something already bad only to see them fail? Not because of their competence or knowledge but for the entrenched false problem they were put to solve? I can count several. Let's hope Audrey will prove us wrong.