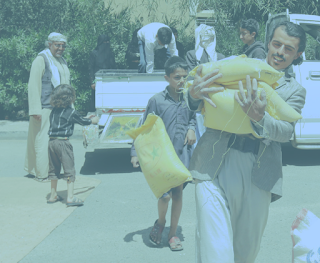 Food aid being delivered to Jews in Sana'a


Volunteers of the Yemen-based charity Mona Relief delivered food packages to poor Jewish families in Sanaa this week thanks to Kuwaiti donations, the Jerusalem Post reports. Since the outbreak of the civil war, the stipends the Jews received in their Sanaa compound dried up and the remaining Jews are struggling to make ends meet. The article puts the number of Jews in Yemen at 86, but there are probably half that number. Last year, the Jewish Agency airlifted the last group of Yemeni Jews who wished to move to Israel. (With thanks: Lily)

It is the fourth time the organization has provided aid to the tiny Jewish community that remains in Yemen, as part of the NGO’s wider humanitarian relief projects. The donations began in 2016 when a journalist alerted Mona Relief founder and CEO Fatik al-Rodaini about the poor conditions in which the Jewish community was living. Rodaini visited the families in December 2016, and met with their leader, Yehia Yousef. Several days later Rodaini reached out to the community with food packages, blankets and hygiene kits funded by the NGO’s online fund-raising campaign.

“That was the beginning of our initiative to the Jewish minority in Sanaa,” Rodaini told The Jerusalem Post. “I promised to help them monthly with food aid and medicine to Jewish members who are sick with chronic diseases. However, I couldn’t fulfill my commitments toward them due to the lack of resources. But I tried to help them annually.”

Rodaini has managed more than annual aid; the last two times, however, were made possible with the aid of anonymous Kuwaiti donors.

Asked about the unusual circumstances of Kuwaitis donating to Jews, Rodaini said that not only had the donors accepted to help the cause when he had asked, they subsequently offered unsolicited donations to the community.

“We are talking about humanity and not about their religion,” said Rodaini, adding that the NGO delivers supplies to 86 Jews in Yemen, making up some 20 families.

Read article in full
Posted by bataween at Wednesday, October 11, 2017