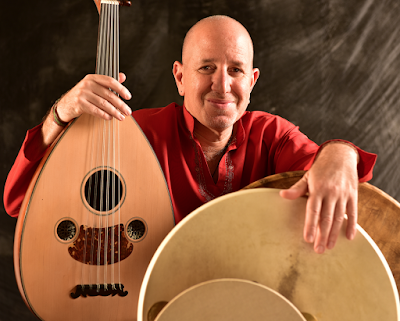 Virtuoso oudist, vocalist and percussionist Yinon Muallem is flying in to London from Turkey for a 2 December concert, Funky Dervish. (Photo: Ozgur Olcer)

Organisations representing Jews from the Middle East and North Africa, in conjunction with Israeli embassies around the world, are gearing up to mark the fourth annual Memorial Day for Jewish Refugees from Arab Countries and Iran with an array of exciting events.

The official date in the calendar, as approved by the Israeli Knesset  in June 2010, is 30 November, but memorial events are being held all week-long and even during an entire month.

In London, the centrepiece is a concert at JW3 on Saturday (Motsei Shabbat) 2 December at 8pm. Harif, the UK Association of Jews from the Middle East and North Africa, is teaming up with the Jewish Music Institute, the Israeli Embassy and the cultural centre JW3 to hold what promises to be an exhilarating musical experience with Yinon Muallem and his backing group. Born to Iraqi-Jewish parents in Israel, Muallem is an exciting Vocalist, oudist and percussionist musician and composer whose work fuses eastern styles and influences. He is flying in from Turkey especially for the occasion. Tickets here.

Harif is also arranging the London screening of the documentary Night of Fools, which tells the little-known story of how Algerian Jews played a key role in the US liberation of North Africa in 1942. The film will be screened for the first time on 28 November at JW3 and will be followed by a Q&A with the director, Rami Kimchi. Tickets here.

Harif is also partnering in the screening of Remember Baghdad on 3 December at 5pm at the Phoenix cinema in Muswell Hill.

In Geneva on 30 November, the Swiss friends of Justice for Jews from Arab Countries are putting on Operation Mural, the secret operation masterminded by David Littman to evacuate over 500 Moroccan children to Israel. The film will be followed by a Q&A with Littman's widow, the historian Bat Ye'or.

In California, JIMENA has arranged a series of screenings, concerts and talks.