In a corner of the former Bezeq building in Jerusalem, converted into a pop-up art gallery, you will find a fascinating exhibition called 'Homelands'. The exhibition is one of the first to explore the destruction of the Jewish communities of the Islamic world through the eyes of Israeli artists. 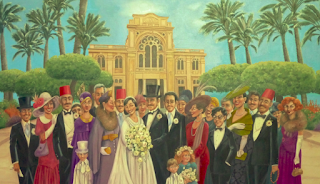 
Homelands is one of the 26 exhibitions of the Jerusalem Biennale, a showcase of Israeli contemporary art whose theme this year is 'Watershed'. It brings together  14 Israeli artists who for the first time explore themes thrown up by their families' experience of uprooting from Arab and Muslim lands.

Like a  prism breaking beams of  light into a spectrum, 'Homelands presents reflections of the Jews of Islamic lands,' write the curator Meirav Balas and producer Lenore Mizrachi Cohen .' This exhibition examines the moment of individual departure....the uniform narrative splits into  the 'now' that is made of countless experiences, like the number of those uprooted.'

The themes range from nostalgia to violent rupture. For Neta Elkayam, who still sings at concerts in her native Morocco,   the move to Israel is barely an uprooting.  Her Moroccan city skyline  resembles that of Jerusalem, as if the transition from the land of her birth to her new country were a gentle continuum. For Tal Gartenberg, the past is represented by a collection of colourful Moroccan tiles. Florence Nasar's video is of lovingly stuffed vineleaves.

Babette Marciano contrasts the traditional dress of her grandfather's generation and  his French daughter or granddaughter  in her new country in 'Alps,' while Camille Fox's portrait of an Alexandrian society wedding exudes the confidence of a sophisticated and prosperous Jewish community perfectly in tune with modernity.

Two sheets of paper, 'Turning' and 'Irreversible' by Lenore Mizrachi Cohen, hang from the ceiling, the one showing  her grandfather in a traditional fez, garlanded by a frame of Arabic  calligraphy. On the other side is a modern-day grandfather. Another work shows a marrying couple, then and now. The impression is that the departure is irreversible, but that life's drama (with its celebrations) goes on regardless - the protagonists just look different.

Shay Abadi's banner showing Gamal Abdel Nasser, the president who expelled thousands of Jews from Egypt, together with his father and uncle, is perhaps the most poignant work in the exhibition. It seems to be saying that his family, too, belongs to the Egyptian national narrative which so brutally drove them out.

Lida Sharet Massad's work 'Gorasht', Farsi for 'Let it go', seems to tipify the reaction of so many Jews to their uprooting. 'Don't dwell on the past, with all the losses it represents. Look to the future.

The Jerusalem Biennale is on at several locations in the city until 16 November. Entrance 45 shekels.