If the archive must be returned, let it go to Kurdistan

Harold Rhode was in Baghdad when waterlogged Jewish documents and books were discovered in the basement of the secret police headquarters in 2003. In this interview with the JCPA's Lenny Ben-David, he pays tribute to Ahmed Chalabi, the Iraqi leader who first drew Rhode's attention to the trove. If the collection has to go back to Iraq, Rhode says that it should go to Kurdistan, where the population is sympathetic to Israel. (With thanks: Imre) 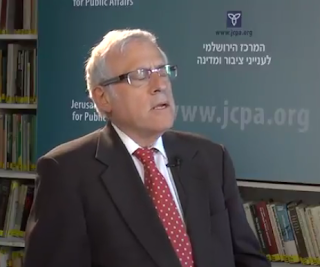 Harold Rhode being interviewed by Lenny Ben-David of the JCPA. Click here to see video.

Harold Rhode: Here’s the problem. According to international law, you cannot steal the patrimony of another country that you take over. So the Americans, the State Department decided you can’t allow this material, it has to go back to Iraq. But the question really is, and periodically it comes up. Now, the Iraqi government – because it is still basically anti-Israeli – the Iraqi government cannot be seen to allow this to be coming to a place like Israel, because then all their Arab brothers are going to get upset with them and they will be shamed and Middle East shame is more important than anything. Shame is what other people say about you and they lose honor, so they can’t agree to us. So how do you solve this problem? Well about five years or so ago, the Iraqi government graciously agreed to let the material stay in the United States for about five years, if I’m correct, and they had exhibits all over the place in the United States. And the material in the meantime remained in the American archives. Now we’re getting to the end of that five-year period…what do we do? Well, the American government wants to return it to the rightful owners by international law which they have decided, since they signed an agreement with an American, that it belongs to Iraq. Well no, it didn’t belong to Iraq! It is the heritage patrimony of the Jewish community; it is their materials, their documents. Who and where are these people? About ninety percent of them today are here in Israel. That’s who it belongs to!

Lenny Ben-David: So it’s going to go to the Iraqis and they’re going to put it in another basement? Can that move be stopped?

Harold Rhode: Well, here are some possibilities. First of all, from a legal point of view, the American government took from Iraq millions and millions of documents about the Baathist leadership in Iraq. Now that is the patrimony and heritage of the Iraqi people. America has no intention of giving this material back, but the Jewish material, well who cares about the Jews? And they want to give this back, why don’t they want to, since they took the all of this material, shouldn’t they be responsible for giving it all back? Well, no one wants to handle that issue. That could create an international problem, and God forbid that should happen. Now, here are the solutions that we could come up with. The Iraqi government could, if it wanted and if the State Department wanted, keep the material in the United States under the guise of going through additional exhibitions, here, there, or God knows where.

Lenny Ben-David: And I assume there are Jewish communities in the United States that would be happy to host such exhibit.

Lenny Ben-David: I would also add that they have got very good relations with the Jews who still live in Kurdistan.

Harold Rhode: Yes, there are not that many, but there are. This is the patrimony of the Jews who lived in Iraq – that’s who it belongs to. We know that Saddam stole it. We have a witness of someone who saw it being stolen from the last functioning Jewish synagogue. That’s who it belongs to. That’s where it should be returned to. And hopefully, in the future, it possibly could end up in the only museum in the world which is dedicated to the history of the Jews of Iraq or the Jews of Babylonia – the ancient title of what is Iraq – and that is in Or Yehuda, that museum being outside of Tel Aviv.

Read article in full
Posted by bataween at Monday, October 02, 2017

The archive should be intercepted and destroyed before it returns to Iraq.

Yes Kurdistan doesn't have enough problems because of two Kurdish-Israeli imbeciles with one Israeli flag.

Kurdistan as far as I know is still in Iraq and independence is not in the foreseeable future. So sending it to Kurdistan is in effect sending it to Iraq.

This kind of negotiation is better kept discrete. Stop being so strident and start doing things the Jewish way. The quiet way.