Voting for the new head of UNESCO takes place on Monday in Paris. The Egyptian candidate, Moushira Khattab, is a front-runner and has the support of the tiny Jewish community of Egypt, led by Magda Haroun. But Khattab's candidacy has been attacked by rights groups, who claim she has been sometimes 'complicit' in the government's human rights violations. Report in The Times of Israel (with thanks: Boruch):

The head of Egypt’s minuscule Jewish community has voiced support for the country’s UNESCO candidate, as the cultural body prepared to vote for a new leader Monday amid intense Israeli lobbying to thwart perceived anti-Israel bias. A statement from Egypt Jewish community head Magda Haroun said that Moushira Khattab has shown an impressive and “genuine commitment to our cause to protect Egypt’s Jewish heritage.” 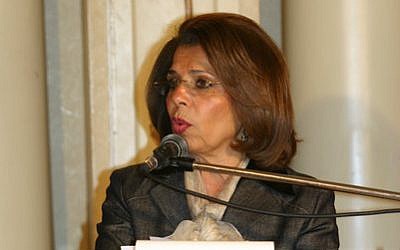 A US-educated longtime diplomat, Khattab is believed to be among the front-runners for the UNESCO top post, to replace Irina Bukova. Voting is due to start on Monday in Paris.

Khattab has also served as chairwoman of the National Council for Childhood and Motherhood and was one of the main architects of legislation prohibiting the marriage of underage girls and female genital circumcision.In expressing her support for Khattab, Haroun cited a 1990s campaign for women’s rights when Khattab served as a top aide to the country’s first lady at the time, Suzanne Mubarak.

Khattab’s candidacy has been opposed by a number of Egyptian human rights groups, with a top Egyptian rights lawyer saying the country’s candidate for UNESCO’s top job is not qualified for the post because of her silence and “sometimes complicity” in the government’s repressive policies.

Would it be OK if I cross-posted this article to WriterBeat.com? There is no fee; I’m simply trying to add more content diversity for our community. I’ll be sure to give you complete credit as the author. If “OK” please let me know via ema6il.