Two Egyptian embassy officials paid a courtesy call to a community of Egyptian Jews in Paris on Yom Kippur. The visit seems to herald a better era in relations. 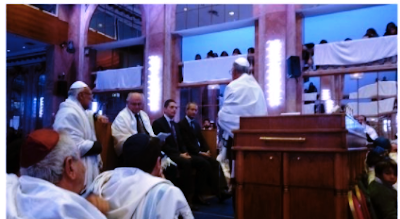 “The Egypt which no longer wished to know us has not quite forgotten us,” declared Yves Fedida of the Nebi Daniel Aasociation. The visit recalled that of General Neguib to the Cairo community in 1952.

Deputy Chief of Mission Hesham el Mekwad and First Secretary Mohamed Kandil called on the Oratoire Nebi Daniel on the holiest day of the Jewish year. In his report of the event, Mr Fedida praised the Egyptian government for taking steps to preserve Egypt's Jewish heritage.

They have pledged to protect three cemeteries in Alexandria from intruders and vandals and are undertaking a survey of graves. The Egyptian government will finance the repairs to the Nebi Daniel synagogue in Alexandria to the tune of 5 million euros. In Cairo the Drop of Milk charitable association has been revived to catalogue registers and restore Cairo cemeteries. The Association also aims to establish an exhibition space and cultural centre.

Egyptian Jews are still waiting for the government to follow through on its promise to permit them to obtain copies of communal records.

The Nebi Daniel Association is keeping up the pressure by urging people to sign the petition here.

All cemetaries of the Egyptian Jewish communities and houses of worship need to be protected. No synagogues should be turned into a museum because of the sanctity of these places. The idea of a museum can be pursued in any other buildings owned by the community.