Operation Torch marked the American invasion of North Africa in 1942, and the first stage in the defeat of the Vichy regime in Algeria. But this significant event merits little mention in the history books and the role of the Jewish resistance gets even less attention. The immediate failure to restore Jewish rights would put down a  marker for America's future Middle Eastern policy, claims Robert Satloff in Mosaic (with thanks: Imre)


Until Torch, the misfortune facing the Jews in lands under fascist domination was, for the Roosevelt administration, a faraway problem, distressful to contemplate but distant from the battle front. Torch changed that equation. For the first time during the war, Torch’s success put American troops in direct control of territory in which Jews faced government-ordained and -implemented persecution and possible death.
This reality made “the Jewish question” a pressing issue. Moreover, thanks to one remarkable but little-recognized fact, it became an immediate issue as well.
In the early morning hours of November 8, 1942, as U.S. and British forces waited anxiously on troop ships spread across the North African coast, 377 young men, led by a twenty-year-old medical student named José Aboulker, had fanned out across Algeria’s capital city of Algiers to execute a daring mission that would help determine the fate of Torch.Aboulker and other resistance leaders had established clandestine contact with the Americans, who promised to supply them with machine guns, grenades, and other weapons. Those promises had gone unfulfilled; but the conspirators were undeterred. Armed only with knives, pistols, and antiquated 19th-century rifles, they aimed at nothing less than to take over the city, arrest the local Vichy generals, admirals, and prefects in their beds, cut communications with the outside world, and immobilize thousands of French soldiers in their barracks. 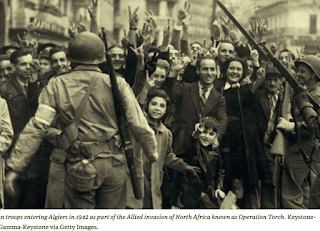 Astonishingly, through gumption, guile, and guts, these ragtag volunteers succeeded. By 2:00 a.m. on the morning of the invasion, Algeria’s capital was theirs. No less astonishingly, they then proceeded to hold it for an additional five critical hours, making it far easier for Allied troops to enter Algiers than had proved the case in the landing zones of Casablanca and Oran.
If mainstream histories of Torch mention this episode at all, they describe it briefly as but one in a line of heroic tales of French partisans. The official U.S. army account of American military engagement in North Africa, for example, records that “Algiers came under control of the irregulars of the French resistance at the time the landings began.”
Read article in full

On 28 November Harif is putting on a London screening of Rami Kimchi's 'Night of Fools', a documentary about the Jewish role in facilitating the American wartime landing in Algiers. Details here.
Posted by bataween at Tuesday, October 10, 2017

The Jewish underground in Algiers during WW2 is described at length in an article by Elliott A Green in Midstream, January 1989. Murphy gives little mention or credit to the Algiers underground in his memoir of the war. And he does not mention Jewish participation in the underground let alone the Jewish majority of the underground fighters being Jews and the leader, Jose Aboulker being a Jew. Murphy was all too typical of US State Dept operatives.