The Iraqi-Jewish archive will go back, says US

Bad news regarding the Iraqi-Jewish archive: it is set to return to Iraq a year from now - unless a new agreement is negotiated between Iraq and a 'temporary host institution or government'. (With thanks: Imre, Lily) 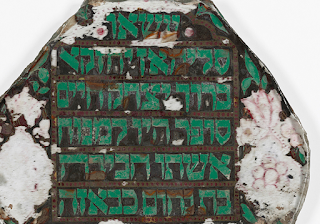 A Tik (Torah case)  found in the archive and dating back to the 19th or 20th centuries.

NEW YORK (JTA) — The United States will return to Iraq next year a trove of Iraqi Jewish artifacts that lawmakers and Jewish groups have lobbied to keep in this country, a State Department official said.

A four-year extension to keep the Iraqi Jewish Archive in the U.S. is set to expire in September 2018, as is funding for maintaining and transporting the items. The materials will then be sent back to Iraq, spokesman Pablo Rodriguez said in a statement sent to JTA on Thursday.

Rodriguez said the State Department “is keenly aware of the interest in the status” of the archive.

“Maintaining the archive outside of Iraq is possible,” he said, “but would require a new agreement between the Government of Iraq and a temporary host institution or government.”

The archive was brought to America in 2003 after being salvaged by U.S. troops. It contains tens of thousands of items including books, religious texts, photographs and personal documents. Under an agreement with the government of Iraq, the archive was to be sent back there, but in 2014 the Iraqi ambassador to the U.S. said its stay had been extended. He did not say when the archive was to return.

Democratic and Republican lawmakers and Jewish groups have lobbied to renegotiate the deal, arguing that the documents should be kept in the U.S. or elsewhere where they are accessible to Iraqi Jews and their descendants. JTA reached out to lawmakers who have sponsored resolutions urging a renegotiation of the archive’s return but did not hear back in time for publication.

Iraq and proponents of returning the archive say it can serve as an educational tool for Iraqis about the history of Jews there and that it is part of the country’s patrimony.

Read article in full
Posted by bataween at Sunday, September 10, 2017

It is part of the Jewish patrimony, not that of Iraq. Iraq did not want the Jews and still does not want them. Jews do not owe anything to Iraq. Sending the archive to Iraq would endanger it and the claim that it would be used for educational purposes there is ludicrous. We know that from experience.

The State Dept's promise to Iraq is subordinate to the ownership of the artifacts by Jews.

The Forward´s token mizrahi is going to be very happy about that.